It's the eleventh edition of Rating Drink Powders - a series in which I taste drink mixes that are sold in shops in the USA and can be bought over here - in the UK - through speciality shops that import American goods.
In this edition, I try a few brands I've had before, like Hawaiian Punch and Kool-Aid, as well as sample drinks from big names like Jelly Belly and 7-Up.
As per usual, all drinks will be rated out of five stars. 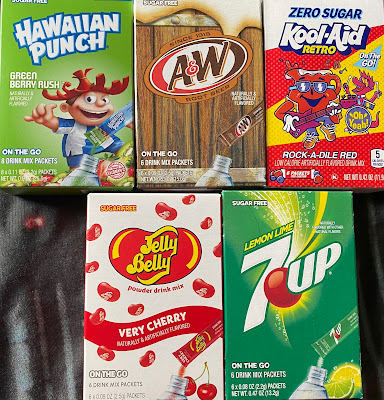 Hawaiian Punch Green Berry Rush
When I first opened the sachet, the smell immediately reminded me of something. However, it took a white to conclude that it smelled of Haribo sweets. That's not a bad thing.

As for the taste itself - well, there wasn't much to it. Very watery with a mild hint of.. something. And it's not Haribo.

As well as that, I have also tasted a different root beer powder when I tried Dad's Root Beer in the second edition of the Rating Drink Powders post in July of last year.

The Dad's Root Beer scored highly with four-and-a-half stars. Will this one come close to that? The proof, as they say, is in the pudding root beer.

Time to give it a go:

I can confirm that this did taste exactly like I expected. It is on par with the previous root beer drink I tasted.

Kool-Aid Retro: Rock-A-Dile Red
In August, the tenth edition of Rating Drinks Powders was a Kool-Aid special pitting two flavours against each other. Both scored one star each.

The latest flavour I've came across is called 'Rock-a-dile Red'. Let's see if it's better than a star.

Hmm.. I still feel like the Kool-Aids are a lot watery and lacking in a strong flavour. However, this one is slightly better. Highlight on the word 'slightly'.

Jelly Belly Very Cherry
The famous Jellybean company - Jelly Belly - is also in this drink powders game with some flavours of its own.

Very Cherry is indeed that. However, it does not come close to the Starburst Cherry I tasted over a year ago.

With that said, it's very refreshing.

Lemon and Lime 7-Up
I couldn't believe my eyes when I found 7-Up drink mixes. It's one of my go to drinks (if there are no Fantas!).

Unfortunately, this drink didn't remind me of 7-Up itself. However, it is still a decent lemonade flavour but not something I would go out of my way to try again because there are other lemonades I've tried in previous Rating Drink Powders posts that are slightly better.

Still, it wasn't too bad. I may have enjoyed it more if it was named something else other than 7-Up.

Result
And the winner is.. A&W Root Beer. I genuinely thought that, when I picked the five to battle it out, 7-Up had the strongest chance of taking the win. I didn't doubt that the root beer flavour would be in contention, though.

Another five drink powders will be sampled sometime next month.