The spreadsheet had its first perfect week last Thursday when it had both Minnesota -2.5 and Over 42.5 in the point-spread and total for the Vikings' 33-26 victory over the New England Patriots on last week's Thursday Night Football game.
The result meant that the spreadsheet now has a record of 12-10 so far in 2022. For what it's worth, the spreadsheet is 6-5 in pointspread plays and is also at that number as it pertains totals recommendations.

For tonight, the spreadsheet has the Buffalo Bills to beat the New England Patriots by four points and for the total number of points to be forty-six. Therefore, it is calling for plays on the bookies' favourite and the over.
Recommended Plays
Buffalo -3.5
Over 43.5
I have referred to a database of results dating back to the 2021 to see whether there is anything to make a case for both plays. Here's what I found:
Posted by David Taylor at 9:30 AM No comments:

I am going to have a bet on every single game of this year's World Cup. And - on top of that - for fun, I'm going to share my predictions and keep track of my progress.
This post will float across the blog for the next month. It'll be updated each matchday right up to the day of the final.
* * * *
Sunday 20 November
For the first game of the tournament, I've done a bet builder with three selections.
Qatar .vs. Ecuador
1) Under 3 Goals in the Match
2) Both Teams Receive a Card in the Match
3) Most Goals to be Scored in 2nd Half
I've laid out £5 and will get a 25% bonus on my return should it win. 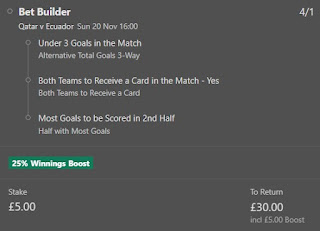 Result: Qatar 0 Ecuador 2
I lost the bet. I correctly guessed the match to have under 3 goals and for both teams to receive a card. However, both goals were scored in the first half. Therefore, the losing selection was the 'Most Goals to be Scored in 2nd Half'.
I'm at -£5 heading into tomorrow's fixtures.
Monday 21 November
There are a trio of games today. I have a free £5 bet builder on the England .vs. Iran game, so I'm not laying anything out on it and - because of that - I've gone a little bit overboard by betting on a red card in the game as one of my selections.
England .vs. Iran
1) England to win
2) Both Teams to Score
3) Over 2.5 Cards
4) A Red Card in the Match
I have been given a free £1 bet builder with Sky Bet. I've picked two things:
1) Harry Kane to score 2 goals
2) A Goal in Both Halves
Result: England 6 Iran 2
Harry Kane didn't score any of the goals and was substituted later in the game to end any chance of him getting one, let alone two.
For the remaining games of the day, I've gone with;
Senegal .vs. Netherlands
1) Both Teams to Score in Both Halves £1 single at 25/1
Result: Senegal 0 Netherlands 2
The scoreline tells the story - both teams didn't score in both halves.
Wales .vs. USA
I have placed a £2 bet builder and need the following things to happen.
1) Gareth Bale to Score Anytime
2) Gareth Bale Over 0.5 Shots On Target
3) Aaron Ramsey Over 0.5 Shots
4) Both Teams to Score
Result: Wales 1 USA 1
Three of the four selections came in. The one which let me down was Aaron Ramsey not having at least one shot on goal.
Tuesday 22 November
Starting off today, I have not won any bets and I am £8 in the red. I don't have any free bets on the four matches for the day.
Argentina .vs. Saudi Arabia
I've a £2 bet builder with two selections in the first game of the day. The things I need to happen are for:
1) Lionel Messi to Have Over 0.5 Shots on Target
2) 2nd Half to Have Most Goals
Result: Argentina 1 Saudi Arabia 2
What an upset. Fortunately, it worked out well for my bet. The first selection came in within the first couple of minutes when Lionel Messi had a shot stopped. That was followed by Saudi Arabia's two goals in the second half after coming back from the break a goal down. I had a return of £4.40.
Denmark .vs. Tunisia
A £1 bet builder with the following two selections
1) Kasper Dolberg Anytime Goalscorer
2) Under 3 Goals in Match
Result: Denmark 0 Tunisia 0
I had my £1 returned to me because it fell under the promotion which refunds bets if there is a goalless draw.
Mexico .vs. Poland
I have bet £5 on:
1) Both Teams to Score in the 2nd Half
Result: Mexico 0 Poland 0
The 'Bore Draw' promotion doesn't apply to the market I bet in this game. Therefore, this was a fiver loss.
France .vs. Australia
I was going to bet on Kylian Mbappe to score two or more goals, but then decided I'd pick him to be the man of the match. I have £2.74 riding on that one at odds of 3/1.
1) Kylian Mbappe Man of the Match
Result: France 4 Australia 1
Mbappe was named the Man of the Match. In my opinion, it was a close call because a lot of those French players, for example: Olivier Giroud, could have easily won it. This win brought back £10.96. 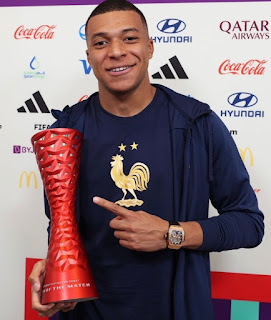 After last week's disaster, which was tasting a Vegan Festive Bake from Greggs, I corrected the ship this week by buying my first proper Festive Bake for Christmas 2022. 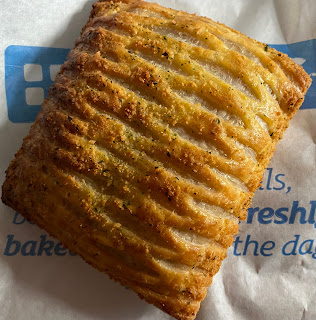 I had it yesterday lunchtime. Apparently, there is a new recipe, but I didn't notice any difference to previous years.
Another thing I bought was a chocolate coated Christmas cake. I was hoping it would have an inside similar to the little mini Christmas puddings Greggs used to have when I was a child. Unfortunately, my wish was fruitless. It was a chocolate sponge. Still, it was enjoyable. 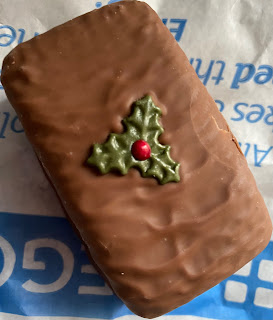 Posted by David Taylor at 9:00 AM No comments:

Wales In Qatar: Over And Out

Look - the fact that the team even made it to Qatar should be the story today.

I've written many times how amazing it is, now was, how I finally got to see my home country compete on football's grandest stage.

I sit here, at the PC, with thoughts of some legendary players - who wore the red of Wales - from my childhood and young adulthood who were just as good, if not better, than the members of the current squads that have made it to the last two Euros and now the World Cup.

None of those players had the honour of getting to the big ones.

Respect to the current era who have.

I don't know what happens from here other than I can now say I've seen Wales play in a World Cup.

I hope it's not the last time I see them in one.

Posted by David Taylor at 9:06 PM No comments:

At the start of the year, I set myself a goal to read at least five books by Stephen King.
I was a little bit cheeky with the number because I was planning to read more than five because I have set a long-term aim to read everything I can by the author.
As of today, I have finished twenty-three titles. There are a heck of a lot more to read, but I have - for the past few weeks - decided to take a break, for a reason I'll explain below, until the start of 2023.
I've read a few King books, here and there, over the years but I started from scratch with his first novel - Carrie - in 2021 and decided to read everything in order from early 2022. With that said, I did move some books to the front of the queue when I decided to read a copy of 11/22/63 I have had since the paperback came out years ago.
I also bought - and read - Fairy Tale when it was published back in September.
The Stand is my favourite Stephen King novel so far. I think reading it during the middle of a pandemic made the story even more thought provoking. I cannot help but wonder how scary I would have found it had I decided to read the novel in 2020. 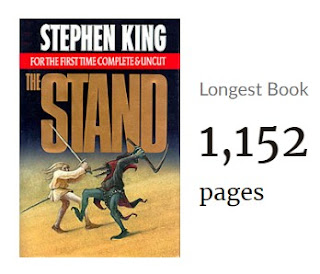 At 1,152 pages, The Stand is also the longest book I have read in 2022 (thanks Good Reads for informing me of that fact!). I don't want to read the next book on my Stephen King list because I'd rather be in contention for the longest book I'll read in 2022.
The title in question is It. According to Good Reads, It has 1,116 pages. I aim to start reading - or in It's case: rereading - it at the start of 2023.
For now, you can see the ranking of the books I have read/reread since I began this mission. 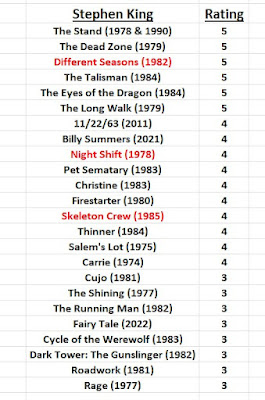 Posted by David Taylor at 10:44 AM No comments:

Here's the team I've entered into the £5 daily fantasy contest for this evening's NFL games.

After returning £9 in last week's contest, I entered one for the three Thanksgiving Games on Thursday.
The team I created picked up a total of 99.64 points finishing in 163,938th place out of 238,095 entries. The score wasn't enough to get any money back. Looking at the results, it appears as though 116.80 was the region where people started to see any returns from their stakes. 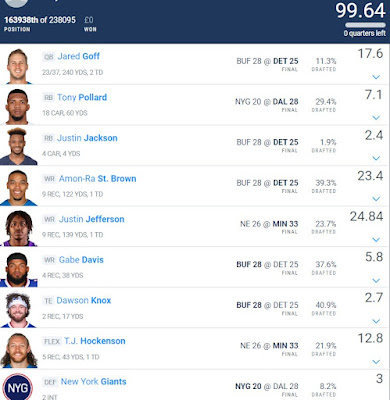 Posted by David Taylor at 6:08 PM No comments:

I didn't like yesterday at all.
Well, that opening sentence was a bit OTT.
Yesterday was a regular day. I just didn't like ONE thing that happened.
Okay, I didn't like TWO things that happened.
I didn't like Iran scoring a goal against Wales in their World Cup group game. I also disliked Iran getting a second shortly after that.
I know I've experienced a lot of sporting heartache over the years. Yesterday was one of the worst.
Posted by David Taylor at 7:00 AM No comments:

Here's the team I have entered into a Thanksgiving Day fantasy contest.

Most of the players would have played their games by the time this post goes live, so you'll know whether it is looking good or not. 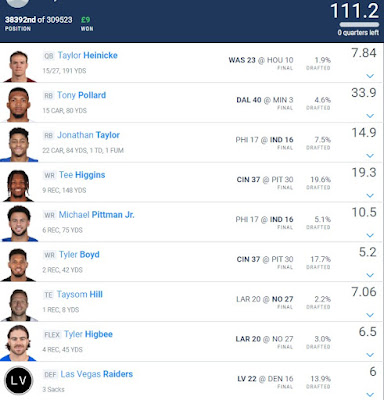 Posted by David Taylor at 12:00 AM No comments: