On May 17th 2021, I published a post titled Rating Drink Powders. In it, I sampled a bunch of American drink powders that are added to water.
Since publishing the post, I've ordered some new boxes and have decided to do a Rating Drink Powders II just to see how well these new varieties are. 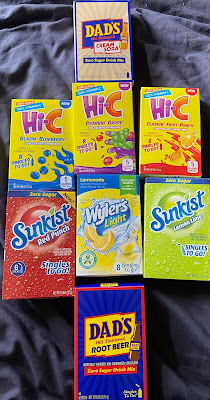 Hi-C Flashin' Fruit Punch
The first powder out of the bag was Hi-C's Flashin' Fruit Punch. This isn't the first time I've had a drink of a Hi-C powder as I was given a free sample of a melon flavour a few months back. For what it's worth, even though I am not keen on melon as a taste, I thought that it was very strong and full of flavour.
Anyway, back to this new variety - Flashin' Fruit Punch. I didn't find it appealing. The melon flavour I tried a while back is much better than this (and as noted, I dislike melon flavour so that should prove how much I found fruit punch disappointing).
Even though the water turns a strong colour of red, the flavour is weak.
Rating: **
Dad's Root Beer
I like root beer, so was intrigued to see what would happen once I added this powder to my bottle of water.
Well - I was very impressed with the outcome. It had a strong taste just like you would expect from a regular drink of root beer.
With all that said, it is not close to my favourite from May - Starburst Blue Raspberry. I have to be fair, though. It's very close to five stars.
Rating: **** 1/2
Sunkist Lemon Lime
I had a feeling this would taste like regular lemon and lime flavoured water I occasionally purchase from supermarkets (they're nice, by the way).
My guess was close. This drink powder makes the water taste like the flavour I like from the shops. However, it isn't as bitter as I am used to. That isn't a bad thing because I found this drink to be very refreshing.
Rating: ***
Hi-C Grabbin' Grape
I tried the grape flavoured Crush powder in May and gave it four stars.
The Hi-C Grabbin Grape powder was lighter and not as strong as the Grape Crush. I didn't find it better than May's grape drink. It is better than the Flashin' Fruit Punch flavour of Hi-C, so I have to rate it higher than that. However, it isn't better than the Sunkist Lemon Lime, so it has to land in the middle.
Rating: ** 1/2
Sunkist Red Punch
Before drinking the Sunkist Red Punch drink, I had a feeling I would end up disappointed because of how much I disliked Hi-C Flashin' Fruit Punch.
The low expectation resulted in a nice surprise.
I liked it. A lot. And it brought back some nostalgia for me. The flavour reminded me a lot of the first time I tried red Kool-Aid when I was staying with American relatives in the 80's or 90's (I cannot remember if I had it in Germany, but I vividly recall having it when they were stationed in England in 1990!).
Rating: ****
Hi-C Blazin' Blueberry
If you read the first Rating Drink Powders post, you'll know that the winning flavour was Starbusrst Blue Raspberry, so  - when I ordered the new powders - I was intrigued to see if a blueberry drink would come anywhere close.
The answer is no.
The only 'win' this drink has over the blue raspberry flavour is the blue colour is darker in contrast.
I've found Hi-C's powders to be disappointing. Blazin' Blueberry isn't the worst, but it is in the same bracket as the grape variety, so it's only fair to have them both tied in the ratings.
Rating: ** 1/2
Wyler's Light Lemonade
I tried two lemonades last month. Both tasted similar and refreshing. I ended up giving them both three-and-a-half stars.
Wyler's Light Lemonade is just like those two. Therefore, it's an easy decision to make regarding how many stars it deserves.
Rating: *** 1/2
Dad's Cream Soda
I dislike any kind of cream soda. The last time I tried it was in 1991. My mother had bought a two-litre bottle (it brings her back to her childhood) and I had a few glasses. I enjoyed it. However, later that night, I threw up. It may not have been a result of the drink itself, but the flavour is what brings me back to that night.
I could have ignored the cream soda powder, but thought I'd buy a box for my mother to see what she thought of it.
When she tried it, she said that it was 'very strong'. Some might think that's a good thing considering how watery some of these powders have been.
I took a sip. Yes, it's strong and very much like a cream soda, vanilla, taste. Even though I would never drink it again, I have to admit that I believe it tastes good and would taste great for cream soda fans.
Alas, and as you already know, I am not a fan. I'll give it a fair rating, though. Just because it is full of flavour.
Rating: *** 3/4
And there you have it. The winner of Rating Drink Powders II is Dad's Root Beer with four-and-a-half stars.
Starburst's Blue Raspberry - from Rating Drink Powders I - remains the flavour to beat.
Posted by David Taylor at 12:00 AM