I came across something intriguing when I was looking through the betting website I regularly use yesterday.
You all know that firms have virtual horse and greyhound tracks, right? Well - how about virtual American football fields?
That's right, I stumbled across the new game where clients can gamble on US football.
Just like regular punting on the sport, you can bet on the straight up winner, the pointspread winner and back the over/under on the totals.
Each 'game' is shown in highlight form so you see all the touchdowns and field goals. Interceptions are also shown.
I tested it out by betting on ten games. I made 'real-time' observations during the experience.
Philadelphia Legends @ New York Legends
The New York team are -7.5 favourites. I want to see how this thing goes before I bet on the pointspread. For now, I'm going to bet on the total.
I have bet on the game to go over 38.5 points.
- The first quarter ended with Philadelphia 7-3 up.
- The 2nd quarter ended 14-6
- The third quarter 21-9
- The final result was 21-16
Hmm, just like reality, I lose
Denver Legends @ New York Legends
I suppose it's going to be John Elway or Peyton Manning at quarterback if it's 'Denver Legends', so I'm going to bet on the Broncos with the +4.5 headstart. 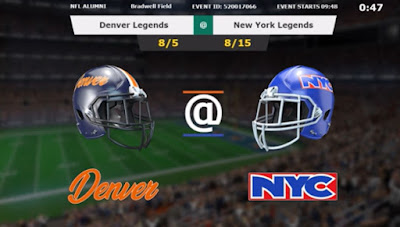 New York won 21-10.
San Francisco Legends @ New England Legends
I've bet on this one to go under the total of 38.5.
The final score was 28-24.
I'm not good at this, am I?
Philadelphia Legends @ Miami Legends
It's also possible to wager on the 'Winning Margin'. I've backed Miami to win by 1-6 at 4/1.
Philadelphia 17
Miami 7
Dreadful result.
Denver Legends @ Oakland Legends
I've gone to the '1-6 Winning Margin' well yet again. This time, I've sided with Denver but they/re underdogs.
Denver won 17-14, so this was the first win I've had.
Green Bay Legends @ Miami Legends
Going with Green Bay -1.5 here.
The final score: 24-17 to Miami.
Not the first time I've lost a bet on a Brett Favre Green Bay team!
Denver Legends @ Philadelphia Legends
I've gone for the under 38.5 in this one.
28-9 to Denver.
A win for me.
New York Legends @ San Francisco Legends
I'm going to gamble on New York +3.5.
Another win as the New York Legends won 28-13.
New York Legends @ Miami Legends
Hmm... I'll gamble on New York, who are -1.5 favourites.
This turned out to be a 21-20 win for Miami. Disastrous score.
Denver Legends .vs. New England Legends
I've backed over 38.5 points.
New England won this game 35-13. Therefore, I have a win to end on thanks mainly to the Patriots (grrrr).
Final Thoughts
This isn't really something I would do on a regular occasion. A bit of fun here and there for small stakes, yes. Not for anything more than that.
It was fun seeing some of the legends on those teams.
Phil Simms, Terry Bradshaw, Jeremy Shockey, Frank Gifford and Kevin Faulk were some of the players I recall seeing on there. The Packers' quarterback wore number four, so that had to have been Favre.
Posted by David Taylor at 12:00 AM