Rating American Jellies And A Pudding

In a recent Rating Drink Powders post, I teased that I was planning to do a spin-off. I didn't explain what this spin-off entailed, but now I can.
Whilst shopping for American groceries a few months ago, I stumbled upon a couple of jellies (Jello?) that were made by the same people behind some of the drink powders. I thought it would be interesting to test out those and see if there were any resemblances with their drink powder counterparts.
The items I came up with were Sonic Ocean Water and Jolly Rancher Blue Raspberry. The former is one of the most intriguing drinks I had tried in the Rating Drink Powders posts while the latter, even though I prefer the Starburst Blue Raspberry to the Jolly Rancher version, is my favourite overall flavour.
I also came across a Dove chocolate filling. I ordered it under the assumption that it was something like an Angel Delight. Then, when I read the box after it was delivered, I realised it was a pie or tart filling. I ended up buying a crust to try out the dessert. 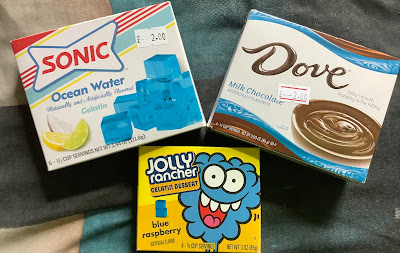 Sonic Ocean Water
In May, I tried the Sonic Ocean Water drink powder and gave it three-and-a-half stars out of five. One thing I was concerned about was whether the unique taste (coconutty) would wear thing after a while.
This dessert tasted exactly like the drink. I couldn't get enough of it. I was still trying to scrape bits off the side of the cup with my spoon. That should indicate just how much I enjoyed it.
It has been months since I wrote the May 11th review of the drink powder and the flavour still appeals to me. I have to rate the jelly knowing that I am bound to still enjoy it months from now just like the drink has been one of my go to drinks since May.
Rating: **** 1/2
Jolly Rancher Blue Raspberry
Just like with the Sonic Ocean Water jelly, the Jolly Rancher jelly did indeed taste similar to what I expect from the drink. 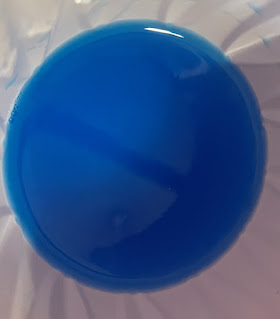 If I had to pick either one of those jellies to taste again, it would have to be the Sonic one. Therefore, I have to give the Jolly Rancher a shorter rating.
Rating: ****
Dove Chocolate Tart
To be fair, it's a bit stupid to rate a couple of jellies and then compare them with a tart. However, I have already invested the time into this post and shall therefore state the following:
The tart was VERY NICE if I say so myself. 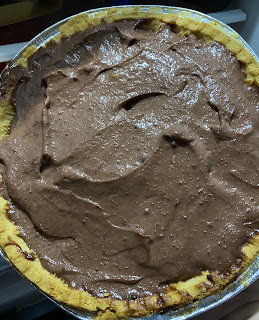 I plan to have new instalments of the Rating Drink Powders posts coming up over the next few months. Keep an eye out for those!
Posted by David Taylor at 12:00 AM