Last year, I came across drink mix powders that are sold in the USA. You're meant to pour these mixes into bottles of water in order to create flavoured drinks.
I wrote extensively about these drinks and even had five posts in which I sampled some and chose a winner in each match-up. I ordered some more boxes recently and thought I'd once again let them square off against each other to see which one is the best.
For this edition, I have Starburst Lemon, Sonic's Ocean Water, Hawaiian Punk Wild Purple Splash, Cherry Limeade from Sonic and Sunny D.
All of the drinks are rated out of five stars. The winner is obviously the one which gets the best rating of this batch. The one to beat overall is the blue raspberry flavour from Starburst. 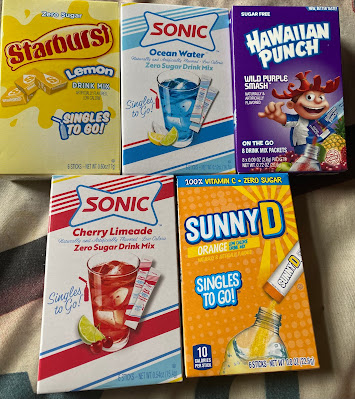 Starburst Lemon
As I mentioned above, the best drink I have tasted is the Starburst Blue Raspberry, so I was intrigued to see if the Lemon variety came close.

It didn't come close to Blue Raspberry. However, it did have a nice and strong lemony flavour. Not the best lemon drink I've had, though!

Sonic Ocean Water
This turned out to be a very dark blue colour even though it looks light on the box. Don't judge a drink powder by its cover, I guess.

When I poured the powder into the drink, I smelled coconutty... and now that I've taken a sip, it also has a coconut scent to the taste.

I have since looked up the drink online and it is in fact coconut!

It sure is something I haven't tasted before. Well, in something non-alcoholic that is.

I'll give it three-and-a-half stars because it is better than average but I can't help but think the uniqueness will wear off after a bit.

As I have written many times over the years, I love American sweets and drinks which have a grape flavour.

And... it also tasted predominantly like a grape drink! I liked this one a lot because it seemed stronger than any of the other 'grapey' powder drinks I've tasted within the past year.

Sonic Cherry Limeade
This one turned the water red. I think that should really be obvious, shouldn't it? However, the 'limeade' part could be construed as green, so I just wanted to be clear.

This was very refreshing. It wasn't too sweet (cherry) and wasn't too sour (lime). It was, as Goldilocks would say, just right.

Comparing it to the other Sonic powder I've tasted, it's on the same kind of level. Therefore, I'll give them equal stars.

Sunny D Orange
I believe that Sunny Delight first came out in the UK sometime during the 1990's. I know for sure it's still around because I would find it in my fridge at home from time to time. I have not tried the drink powder, however.

I'll tell you something I've remembered after taking a sip - I'm not too keen on the real Sunny D drinks. With that said, this absolutely does taste like real Sunny D!

You cannot fault how similar this tastes to the real deal. However, it's not my kind of orange. So I have to rate it low.

And the winner is...
The winner of this edition is the Hawaiian Punch with four-and-a-half stars.