I have placed some bets on the Euro 2020 tournament that starts tonight more than a year after it was set to kick off.

Before I even run down the list of wagers, I think it's worth pointing out some important things to note.

First - the way the tournament is structured - with some of the third place teams in each group having a chance of making it to the knockout stages - makes it even more difficult to predict how the knockout stages will be bracketed. With that said, I did predict the result of each game in the group stages and tried to work out which third placed teams will qualify for the group of sixteen and beyond.

Secondly, this is all for fun. You'll find that I am biased with a few of my punts. I have small wagers on Wales to win (150/1 for my team? Of course I'm going to have a punt!) and Gareth Bale to be the top goalscorer in the tourney (50/1). 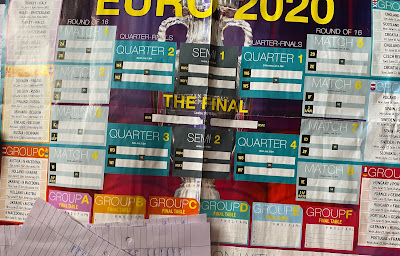 Here are all of the bets as of the time of writing. More might be added along the way, but I am not sure just yet.