The Premier League concluded its 2020/21 season yesterday. This means I can finally take a look through all of the season handicap results from League 2 right up to the Prem.

So, without further ado, let's see which teams won the bookies' handicap tables and how they compare with the projections I shared before the respective seasons kicked off.

League 2
League Two's actual winners were Cheltenham Town. The team did so with a points tally of eighty-two. Going in, the bookmaking firm had given them a ten-point head-start. The ninety-two points wasn't enough to win the season handicap table for 2020/21. That honour went to Cambridge United.

The U's finished second in the real league with eighty points. Add on top the twenty-five points the bookies gave them and they won the handicap table with 105. 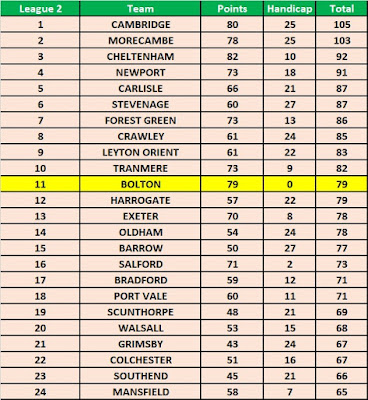 As you'll see, in the table above, Bolton Wanderers are highlighted in yellow. The reason why I've done this is because Bolton was the selection my system picked out ahead of the season.

Bolton did not have any points to start off the season because the bookmakers evidently thought the team had a chance of being League 2 winners. They finished in third place, which was enough to give them automatic promotion to League 1. 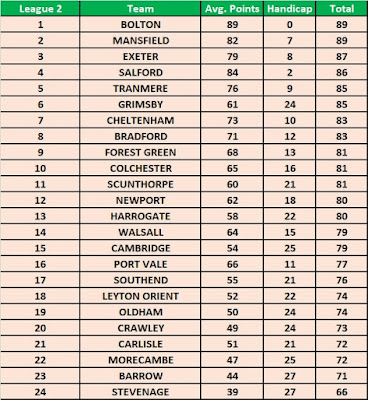 League 1
The season handicap winners for League 1 was Hull City. It did so with ninety-five points. Six of which were the points it was given before a ball was kicked.

Hull wasn't only the season handicap winner for League 1. They were winners of the actual league itself and will now play Championship football in 2021/22. 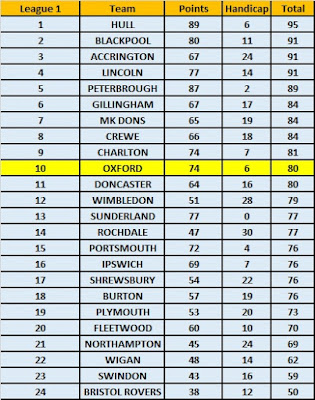 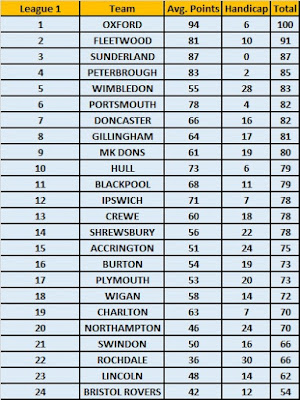 Championship
Norwich was the winning side in both the Championship season handicap table and the actual league.

The Canaries topped the real division with ninety-seven points. It beat the other teams in the season handicap with its one point head-start. 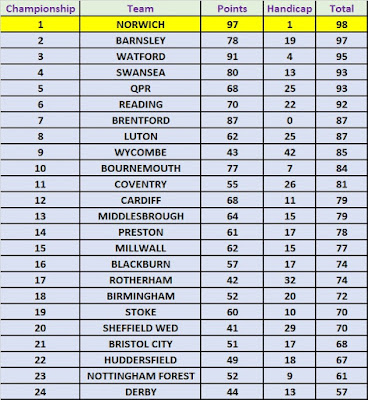 As you'll be able to conclude, by seeing Norwich in the yellow highlight above, my system correctly picked the winner.
It projected that Norwich would get ninety-three points and would be at the peak of the table with ninety-four points once the real season ended. It didn't go completely like that, but 'a win is a win' as they say. 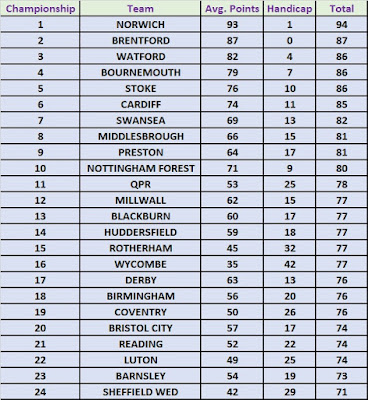 Premier League
West Ham United was the winning selection in the season handicap table for the Premier League's 2020/21 season.

As you'll see below, the Hammers picked up sixty-five points from their sixth-place finish in the actual league. Add in the +44 by the bookies and West Ham topped the season handicap betting table with 109 points. 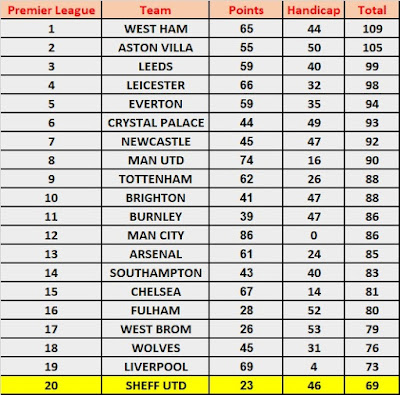 Sheffield United is the team my strategy opted to go with.
What a bad call that was!
The Blades finished bottom in both the real and handicap tables. In the real table, the team had twenty-three points from seven wins and two draws. The season handicap table added forty-six points to the twenty-three to leave them in the basement on sixty-nine.
Going in, my system predicted that Sheffield United would get forty-six points. Seeing as the bookies were giving a forty-six head-start, the strategy predicted the Blades would close on ninety-two.
Bad, bad call. 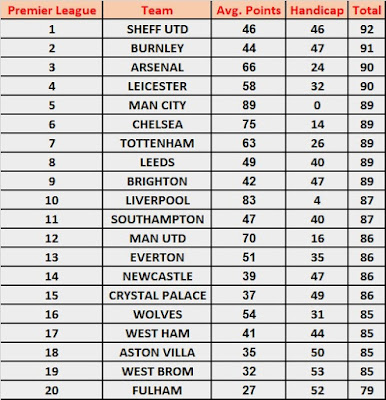 Betting Results
As per usual, I placed the pre-season predictions in a Lucky 15 bet for a bit of fun to look at as the season was in progress.

Therefore, after all that, I finished off with a profit of £3.13. Not bad for something I do for a bit of fun. As a noted above - a win is a win.

Over the next few days, I'll tidy up my spreadsheet in preparation for the 2021/22 season handicap predictions.