On January 27th, I published a post titled Calypso War. In it, I drank four bottles of Calypso lemonade from the USA and shared my thoughts on the flavours. The winning flavour - of the four - was 'Southern Peach'.
I'm back - a little over two months later - with three more flavours to try out. They're in a battle against each other to see if they can compete against the winner from January.
As you'll see, in the picture, the flavours are: Mango Carrot Lemonade, Grapeberry Lemonade and Sweet Cherry Limeade. 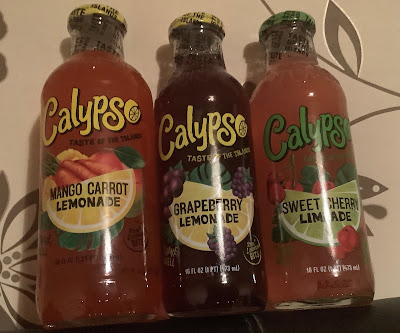 Mango Carrot Lemonade
Wow, what a weird taste this has. I'd have one sip and it would have a sweet aftertaste and then that would be followed by a less sweet, carroty, taste in my next gulp.

Is it better than the peach one from Calypso War I? No, but it's very close. I give it three -and-a-half.

Grapeberry Lemonade
I like grape flavoured pop. This one doesn't come close to those. It doesn't even beat the Mango Carrot Lemonade above.

Sweet Cherry Limeade
Technically not a lemonade, but still a Calypso product. This has a nice mixture of cherry and lime. However, I felt a sour sting each time my lips touched the liquid that - even though it wasn't unwelcomed - made me realise that the peach flavour - from earlier this year - is still the best.

The flavour wasn't bad, though. Therefore, it gets a... three-and-a-quarter only because Mango Carrot was a better taste experience out of these three.