After watching Arrow, and writing yesterday's post immediately afterwards, I visited Twitter and was met with the news that another name from my childhood had passed away.

Howard Finkel, who worked for the then WWF during my early years following pro wrestling, died at the age of sixty-nine.

Finkel was the WWF's lead ring announcer during those years. His voice introduced many a superstar to the ring during his career.

You cannot talk about The Fink without mentioning this trivia note: he was the person who came up with the name 'WrestleMania'. The rest - as they say - is history. 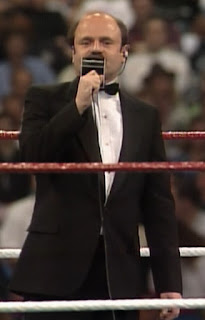