In yesterday's post, I wrote about January 19th being the thirtieth anniversary of my favourite Royal Rumble matches of all time.
Yesterday was another anniversary of a memorable Royal Rumble. However, I feel it even more fitting to write about the day which followed it. 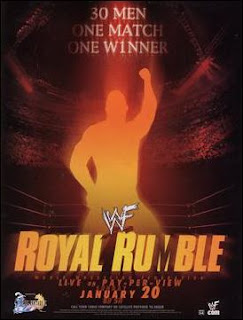 The 2002 Royal Rumble was won by Triple H. I've written many times over the years about how I had spent the summer of 2001 confident that he would come back from his quadriceps injury - suffered in May - and win the Royal Rumble. So confident was I in my belief, I whacked £100 on HHH in a Royal Rumble betting market. My first-ever WWE bet.
It also turned into my first-ever WWE betting win.
There I was, in the early hours of January 21st 2002, alone in my living room (I don't know why I didn't have my friends over as I usually did on those big WWE PPV nights) with £100 riding on Hunter. I remember spooning Strawberry Cheesecake Haagen-Dazs down my throat as the match began. Then, as soon as Triple H's number was called, I was filled with anxious adrenaline. I was taking phone calls all night.
One call interrupted me as I anxiously did push-ups on the living room floor. It was better than pacing the room. Or so I thought.
And then HHH won. Another call. My friend, Stu was almost as excited as I was. I had won £450.
I didn't bother to check my betting account to see whether I had been paid. I went to bed. I had work a few hours later.
That day at work was a blast. Everyone came up to me and congratulated me. Some of my friends and colleagues had entertained the idea of joining me with bets on their own. However, when I was hyping up Triple H's chances of winning the Rumble, I was doing so in the heat of summer. January was too far away for them.
I don't know what it was about that Monday at work. I seemed to have made a lot more in tips than I would at that time of year. Such a crazy day.
After work, I stopped by my uncle's shop to tell him all about my win. He had recently returned here with his new business. It wasn't too far from my work, so I would pop in to see him every now and again.
I sat there telling him that the bet I had told him about had won. That was also the day we spoke about Stephen King and 'Stand By Me' or 'The Body' to those who know. I think. I certainly shared that the tips were amazing that day. I joked that it 'must have been the aftershave you bought me for Christmas'. Maybe I wasn't really joking. Since he passed a little over a year later, I've always kept that bottle for days following big victories. The bottle isn't full anymore. A sign there have been more wins since the early hours of January 21 2002.
The sums have certainly been bigger, but none have been better.
Posted by David Taylor at 12:16 PM No comments:

I didn't remember the date of the 1992 Royal Rumble. If I had, I would have dedicated yesterday's post to writing about it on its thirtieth anniversary.

Actually, it's somewhat fitting that I now get to write about it today. Because - due to the time difference between here and the USA - it fell on January 20th for me.
This match is the greatest Rumble contest there has ever been. Considering it has now been thirty years since it took place, and nothing has topped it, I think it is safe to say that it is unbeatable.
The contestant list was like a who's who of early-90s WWF wrestlers. It had, to pluck out a few names of top stars of the period (and a couple went on to become bigger superstars): Hulk Hogan, The Undertaker, 'Macho Man' Randy Savage, Kerry Von Erich, Shawn Michaels and obviously the winner - who became WWF Champion as a result - Ric Flair.
I watched it again last night. I can't recall how many times I have seen it. Just one of the most best booked matches in history.
It's really just a time capsule of the talent that was around at that time.
1992. Still one of my favourite years in pro wrestling.
Posted by David Taylor at 8:47 AM No comments:

A Look At The Divisional Round (2021 Season)

It's the divisional round of the NFL playoffs this weekend, so I thought I would go through each game and point out which teams I would like to win.
Cincinnati @ Tennessee
The Bengals are +3.5 underdogs as of the time of writing. They had their first playoff win since 1991 last weekend when they toppled the Las Vegas Raiders.
As an Indianapolis Colts fan, I'd like them to continue their run into the post-season by beating the AFC South division winners - the Titans.
Buffalo @ Kansas City
I'll be straight up with you, I am not keen on either one of these teams. They're both excellent!
If I had to choose one, I'd go with the team which hasn't had a Super Bowl appearance in many years. Therefore, it's the Bills. They're currently +1.5 dogs.
LA Rams @ Tampa Bay
The current Super Bowl champions - the Tampa Bay Buccaneers - are favourites to beat the Rams. And rightfully so.
There is something I am interested to look at with the result of this game because I have a feeling the Rams playing Monday places them at a slight disadvantage over the home team. They're also on the back foot because of the travel. My instinct tells me that this will be won by Tom Brady and company. I'd love it if the Rams win, though. Love it.
San Francisco @ Green Bay
If you've been following along, you'll know I want Green Bay to play in the  Super Bowl. I can't back out now.
Posted by David Taylor at 8:56 AM No comments:

There is an article on the Mirror website this morning which states that David Jason would like to play Delboy Trotter once again.

He is, of course, referring to the character he played in the iconic British comedy - Only Fools and Horses - which ran from 1981 to 1991 and then had many special episodes which followed. The last one aired during Christmas of 2003.

One one hand, it would be cool to see another Only Fools and Horses episode. However, in that time, some of the actors who played the secondary, yet important, characters have passed away.

We would no longer have Trigger (Rodger-Lloyd Pack) and Boycie (John Challis) for example. Those two characters alone had certain qualities which drew in the laughs.

Another key loss, since 2003, is the series' creator - John Sullivan - who passed away eleven years ago.

I could see an Only Fools and Horses made. I'd be silly not to considering how many programmes have been brought back from the dead. However, and as I laid out, it has potential to be a miss

Posted by David Taylor at 9:42 AM No comments:

Here's how the daily fantasy teams I entered into a couple of contests over wild card weekend performed.

Saturday's Result
The team finished off with a total of 111.66 points. It looks like I missed the cut by 5.8 points, which is a kick in the teeth. 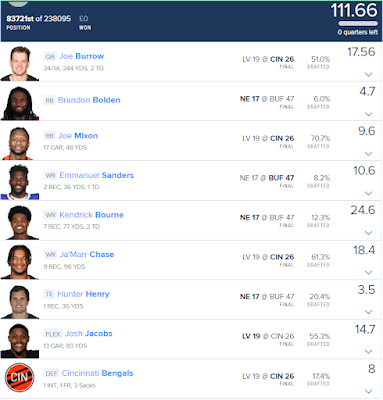 It should go without saying that the team was way off the cut. It looks like I needed to reach at least 113.44 to make anything back.
The finishing position - out of 238,095 entries - was 223,335.
I'm sure I'll be back to give it another go over the weekend for the divisional round of games.
Posted by David Taylor at 11:00 AM No comments:

Just like yesterday, I've entered a £5 contest which has a guaranteed prize pool of £1 Million. The team which finishes in first place wins £200,000.

I didn't win anything yesterday. I'll write about both results in a post next week.

Posted by David Taylor at 6:05 PM No comments:

Here is a fantasy football team I have entered for tonight's two wild card round games.

There is another one for tomorrow's games. I might have a go at that as well. First, I'll see how I fare tonight.

Posted by David Taylor at 9:34 PM No comments: