It is now over a month since we celebrated Christmas and there is something I have yet to open.

No, it isn't a present. All those have been unwrapped. What I have left over from Christmas '22 is a packet of crisps that I - to be quite frank - have feared trying.

Whilst doing an online food shop on the Tesco website a few weeks before Christmas, I came across a packet of limited edition festive crisps.

They were Christmas Pudding flavour. 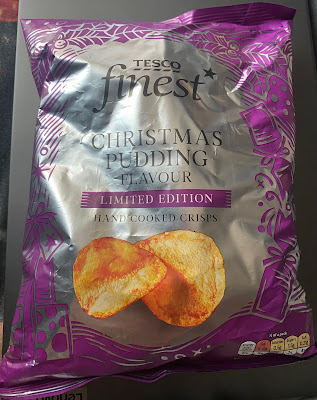 I added them to my basket thinking they would be fun to sample.

But then, when they were in my hands, flashbacks from other Christmas crisps flooded back to haunt me.

To put it bluntly, Christmas Pudding - as a Christmas crisp - does not feel right.

But, they're here beside me. And I'm going to try them 'live' at my desk.

Yeah, I was right. I do not like them.

Just like with all the other crisps, the potato (crisp?) taste you get along with the flavour makes it a terrible idea.

I will never learn the lesson, will I?

Christmas themed crips should be banned from my home!