Last week, when I was writing about being introduced to - and painting a picture of - Raymond Brigg's Fungus the Bogeyman at my local library's children's reading group back in the early 1980s, I couldn't help but laugh at a coincidence which I knew would play out this week.

You see, Fungus the Bogeyman was not the only green-coloured character I painted pictures of at a library.

In 1985, I visited my relatives in Ireland. During my stay, I watched an episode of The Incredible Hulk cartoon series which was titled 'Enter: She-Hulk' (I had to Google the episode title). Unsurprisingly, the cartoon had a female Hulk as one of the characters.

At least a day after viewing the episode of note, I was at a library reading group with my older cousins and, once again, I was tasked with painting pictures. My picture was of, you guessed it, She-Hulk. I can vividly recall people asking me what the green person on the page was.

The librarian, and some of the older children in the group, pondered whether there really was a comic book character bearing that name. I recall having to tell them that she had been in the cartoon.

I found it funny to write about Fungus the Bogeyman, and a branch of the Cardiff library, last week because I had planned to write about She-Hulk, and the (close to) Dublin library, this week due to Disney Plus' new She-Hulk series premiering tomorrow. 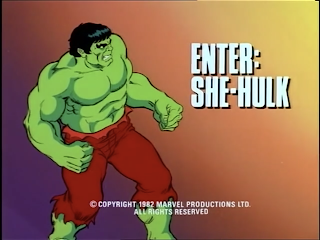 While preparing for today's post, I noticed that the episode of The Incredible Hulk cartoon I watched all those years ago is on Daily Motion. I might take a trip down Memory Lane later today in preparation for tomorrow's series premiere.