I was sorry to read that Raymond Briggs has recently passed away.

Briggs was the creator of some iconic characters from childhood.

I'm sure you may have instantly thought I was referring to The Snowman. However, that wasn't the first thing I thought of when I learned of Briggs' passing.

Fungus the Bogeyman is the 'man' (?) I thought of. 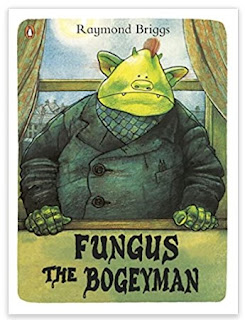 I was very young when I was introduced to Fungus the Bogeyman by Raymond Briggs. I can recall the exact place I came across the ghoulish creation.

Every Monday, I would go to a children's group at my local library. Staff would read books to us and then we would draw or paint pictures afterwards. I recall a few of the books we were introduced to and one of them was Fungus.

I can recall trying to paint a picture of Fungus in the latter part of that meeting. I wasn't a young Picasso, so I am sure it came out a mess.

Of the many books Briggs published, I am sure the majority of memories shared about the illustrator will be about The Snowman. I cannot recall when I was introduced to that character. However, I know I had seen the book before the animated film of it aired on TV on Christmas Eve of 1982.

It could be argued that was the first thing I had 'read' which ended up being produced for the screen. Even though I should have been too young to remember - I can vividly recount the excitement about The Snowman premiering on Channel 4.

There were also Briggs' Father Christmas books which came out before The Snowman. And also the Gentleman Jim books. I can absolutely recall those books being part of the weekly library visits because a painting of Jim and Hilda Bloggs occupied a wall of the library in the section where the librarians read to us children.

All those books I mentioned are still in print today. Even after all those years. Can you imagine how many other people - each with their own stories about coming across those characters - there must be?