It's the final night of group matches in this year's NJPW G1 Climax tournament later.

As you'll see below, the card is stacked with eight bouts to work out the winners of the four groups. 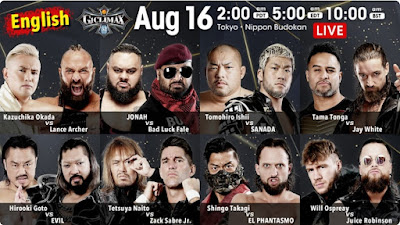 Tomorrow's card will consist of the semi-finals. The final will be held the following day.

Here are my predictions for the block winners.

Block A) Kazuchika Okada
Block B) Tama Tonga (I reckon he'll beat Jay White today to take the block via tie-breaker)
Block C) Tetsuya Naito
Block D) Despite all the talk of this block potentially ending in a seven-way tie, I think it's too obvious that Shingo Takagi will take it

I would like Naito to be the outright winner.