The NFL Headed To ITV

The NFL has a new terrestrial television home in the United Kingdom.

It was announced yesterday that ITV has claimed the rights to broadcast weekly NFL programming leading to February's Super Bowl. As well as that - a couple of the games, which will be played in London - will air live on ITV as part of the channel's coverage of the 2022 regular season.

The BBC had previously owned those rights in a relationship which lasted seven years.

The aforementioned weekly highlights show will be similar to the one the Beeb had. Hosted by Laura Woods, the programme will include former players, and BBC analysts, Osi Umenyiora and Jason Bell. 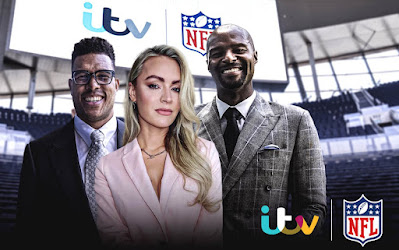 The first episode will air at 11:30PM on Friday September 9th - a day following the opening fixture of the season.

The Green Bay Packers' first regular season game on UK soil - against the New York Giants on October 9th - is one of the two International Series games that are part of ITV's contract. The other is the October 30th meeting between the Denver Broncos and Jacksonville Jaguars.

Even though I am happy to see the coverage remain on TV over here, I'm sorry to see the BBC lose the rights.

One of the positives about watching live NFL on the BBC channels was the lack of adverts. I often chose its coverage of the Super Bowl over Sky Sports' because of that very reason.

Now that the NFL is on another commercial platform, the Super Bowl watching decisions, I find myself in at the start of each year, now become somewhat easier.

With my selfishness aside, this remains good news for NFL fans in the UK because we aren't losing anything.

Channel 5's live coverage of Monday Night Football will continue albeit in what is now the final year of a deal signed in 2020.

I hope that, in this time next year, I would have written about an extension to the NFL/Channel 5 partnership because I've enjoyed the enthusiasm of the US hosts with their British audience.

It truly is one of the things I look forward to watching every Tuesday morning between September and January.