'The Promise' by Damon Galgut was awarded the Booker Prize in a ceremony last night.

The book was the betting favourite with bookmakers when odds for the six titles on the shortlist were first announced. 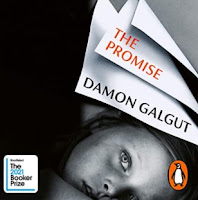 As I wrote last week - I read all six novels that were in contention for the award. I was aware that Galgut's work was favoured by the betting firms, so - when I had to make a choice between that or Richard Powers' 'Bewilderment' to go third in my rankings - I decided to back the underdog out of the two.

With that said, and as I noted in the aforementioned post, I enjoyed 'The Promise'. It could very well have been the third in my order of preference.

It was fun to have read all six of the books ahead of last night's announcement. I will hopefully do this again next year and beyond.

Buy The Promise on Amazon UK