According to Wikipedia - It is twenty-five years today since my favourite 2Pac album was released in the United States.

It's more than just my favourite 2Pac album, though. It's tight up there at the top of my list of best albums ever. If Guns N Roses' Appetite For Destruction is number one, The Seven Day Theory is close behind at 1B.

I know for sure I bought it on a Monday or Tuesday. It could have been  Tuesday November 5 (the day Wikipedia claims it was released in the US) or Monday November 4 (Albums were released on Mondays here in the UK).

Or it could have been a case of me buying it on either November 11th or 12th.

Either way - I bought the album in November 1996 around the time of its release.

And it has been with me ever since.

I have listened to it countless times over the years. And I did so last night knowing that today is apparently the anniversary of its US release.

This was the first posthumous 2Pac album. It was released under his alias of Makaveli (a nod to Niccolo Machiavelli, whose work - ' The Prince' - is something Shakur read while serving time in prison over a year earlier). It was mere weeks after Tupac had died, so this album coming out when it did was quite big to me.

Unknowing that there would be more albums popping up in the future, I saw the Makaveli album as his last goodbye. And - if you think about it - it kind of was a goodbye of sorts. This would have been the final album he was hands-on when it came to production. Anything released beyond The Seven Day Theory isn't a real 2Pac album as far as I'm concerned.

When preparing for today's post, I took the album from my shelf of CDs. It has been a long time since I played the disc itself because I ripped it to digital ages ago. The case has scratches and cracks and that's okay with me. I am usually careful with everything I own. I think the battered case proves just how much use I got out of it before my Apple iPod came along and saved it from further batterings.

Seeing the cover, listening to all those great tracks.. it all takes me back to that time. 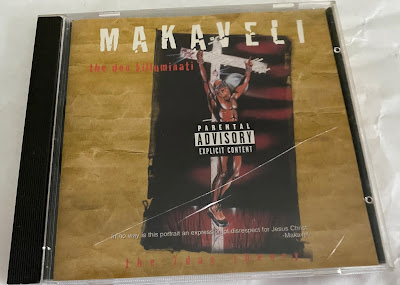