Each summer, I have a punt on the football season handicap markets that are available in the weeks leading up to the new football year. I've been sharing my strategies and bets here at Equinoxx.info for the past few years. However, the results have been dreadful.

For the new visitors who may not have read how I pick my teams, you can read this post from last year that will give you an idea.


Picking Championship, League 1 and League 2 Teams
I bought the Racing and Football Outlook yesterday and placed all the teams in the order I believe the newspaper has predicted the league to finish. I then added the average league position points together in order to see the top four in each league. From there, I decided which team to pick in each league. 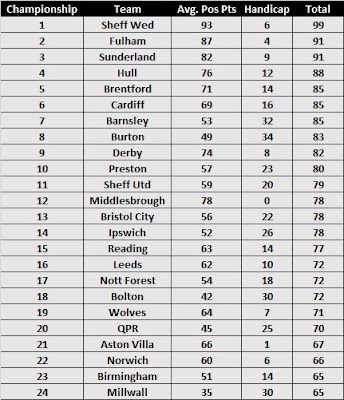 In the Championship, my spreadsheet has selected Sheffield Wednesday to win the handicap league with their six-point head start. I have added them to my betting slip. 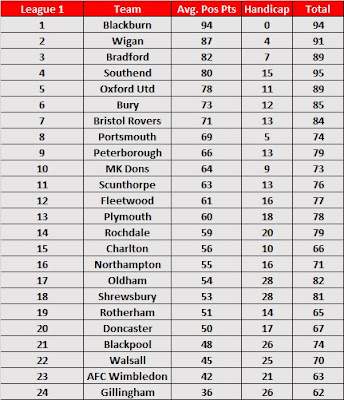 I dislike betting on teams without a head-start, so I am instantly ignoring Blackburn Rovers in the season handicap for League 1. Instead, I'll add Wigan Athletic with the four points. 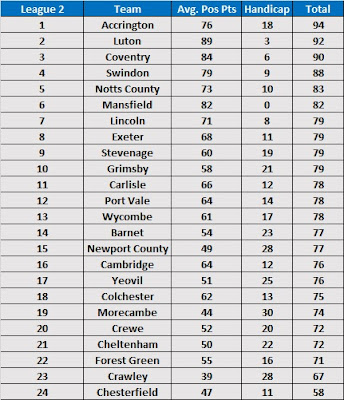 Picking A Premier League Team
If you've read the post on the link above, you'll be aware that the Racing and Football Outlook's Premier League season guide won't be published until next week's issue. So, I usually do one of two things - blindly back one of the teams that came up from the Championship or put all the teams in the order the bookmakers have priced up their markets, add the average position points and handicaps together to see the results. I've done the latter below: 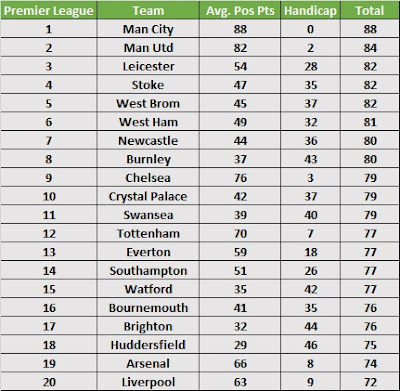 As noted above, I don't really like backing a team with zero points so will overlook Manchester City. I also have a feeling Leicester City will fare poorly this campaign, so will ignore them in third place. I think the thirty-five points for Stoke or two for Manchester United is the most appealing of the top four. It's a toss-up between the two, but I think it's best to get the thirty-five point head start with Stoke.

My Bets
Each-way betting pays to four places (that's why I look at the top four in each league projection), so I have placed an each-way Lucky 15 on the following:

I repeat this every year, but I think it's worth doing so once again - these kinds of annual bets are done mainly for fun to follow along during the season.

As per usual, I'll look back at the actual results once the season has ended.
Posted by David Taylor at 12:00 AM