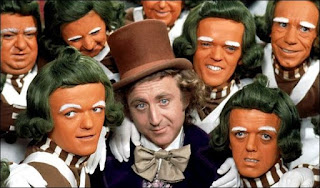 Another Hollywood legend passed away the other day.

Yes, I'm referring to Gene Wilder who was in A LOT of movies that I enjoyed when I was a youngster.

The most obvious film I should mention is Willy Wonka and the Chocolate Factory. I suppose this was the first movie I ever saw Wilder appear in although I was also a huge fan of his collaborations with Richard Pryor. I loved Stir Crazy (I actually watched this again quite recently) and See No Evil, Hear No Evil.

I'm just scraping the surface, though. He starred in critically acclaimed movies like Young Frankenstein and Blazing Saddles.

Wilder is also another in a long list of celebrities who sent me their autograph when I was a child, so will have that as my own personal memory.