I won't start today's post with the 'May the 4th Be With You' line that I've done to near death over the years, but what I will do is start by showing you the t-shirt I am wearing today - Star Wars Day 2021. 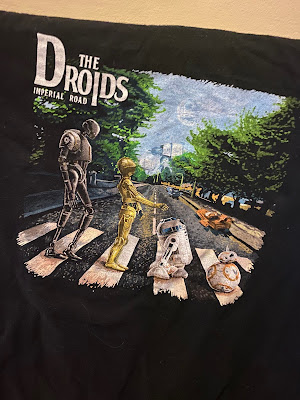 As soon as I saw the tee, which is a parody of the cover of The Beatles' Abbey Road album cover, I knew I had to get it.
Wearing the tee isn't the only thing I've done today.
If you recall, a few weeks ago - I noted that Disney Plus had added the Ewok movies and cartoon series to its collection of Star Wars related titles.
I thought I'd take a trip down to memory lane and watch the first-ever episode of the Ewoks cartoon.

I used to watch the cartoon when it aired on Children's BBC back in the 1980's. People of today will think that - when I write 'Children's BBC' - I am referring to the channel. However, back then, 'Children's BBC' was the after school programming that would be on the regular BBC One station each weekday.
A lot has changed since then, eh? Well - I don't think much has changed in regards to my thoughts on the Ewoks cartoon. Or rather today's viewing highlighted something.
I don't believe I was ever happy to watch it. It was just... there on my television screen. Usually, I would go out of my way to watch my favourite cartoons. I didn't have those feelings for Ewoks. And now - with older eyes - I realised why I didn't go all-in with the cartoon as a child.
It's because it was crap.
Thankfully, there were two new Star Wars things on Disney Plus that did intrigue me.

Star Wars Biomes was an eighteen minute virtual journey through some of the movie series' planets. It was like a drone passing through overhead.
The CGI special was great to watch on a 4K Ultra HD TV.

The Star Wars Vehicle Flythroughs series was similar in ways to Star Wars Biomes with CGI drone-like exploration. Only they looked around - and inside - two of the most popular vehicles in the Star Wars Universe: the Millennium Falcon and a Star Destroyer.
Biomes and Vehicle Flythroughs weren't the only things added to Disney Plus today.
The new animated series - The Bad Bunch - had its first episode launch. I can't watch it, though. I am still many, many seasons behind on The Clone Wars series. Seeing as The Bad Bunch is a spin-off from that, I have to avoid it.
I'll get there. Eventually. I hope.
Posted by David Taylor at 1:54 PM