Triple Doses Of Ewoks On Disney Plus

A few weeks ago, my youngest nephew asked me whether I could find a DVD I have which has the two Ewok television movies that came out in 1984 and 1985 on it.

The search didn't take that long. I had an idea it was in a box of DVDs and Blu-rays I have in one of my rooms. The guess turned out correct.

Within a day of finding the DVD, we both found out that the two movies were on their way to Disney Plus.

It's a good job I remembered where I had stored it otherwise I would have been a bit irked had I taken a while to find the disc only to find out that I could stream it.

The films were put up on Disney's platform last week.

I first watched them back when they initially came out in the 80s. They were on pirated video cassettes that my dad's colleagues used to rent out at their work.

It appears to no longer be produced because it's going for silly money on Amazon. I had a look and people want £39.99 for it. 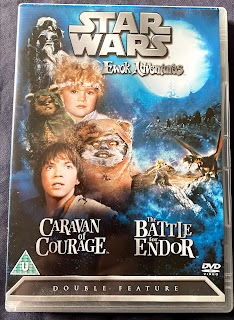 As well as the two Ewok films, Disney Plus has also put up two seasons of the Ewoks cartoon that used to be on BBC when I was a child.

I'm going to introduce my nephew to the cartoon over the next few days. There are twenty-six episodes to get through!

Hopefully, Disney will put up another Star Wars cartoon from my childhood - Droids. I enjoyed that one a little bit better than I did the Ewoks one.