TMNT Came Out In The US 28 Years Ago 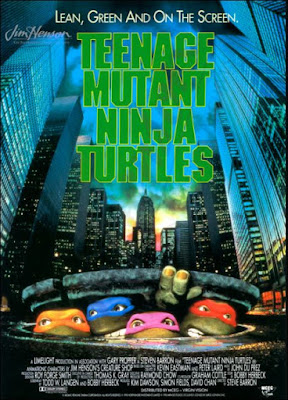 The first thing I saw - when landing on Twitter this morning - was a tweet announcing that it is the 28th anniversary of the release of the Teenage Mutant Ninja Turtles movie.

I have a lot to say on this subject.

Back in the early 1990s, I was a HUGE fan of the Turtles. I watched the cartoon religiously, queued up for the toys on the day they first came out over here (I was there at Toys R Us as the staff member was yanking them out of the brown boxes they were delivered in!) and I loved the film.

If I recall correctly, it didn't come out over here in the cinemas until late-1990. However, by the summer, there were pirate videos of it doing the rounds and I watched it this way.

Speaking of that summer - it was the year I left junior school and the big song of that year, other than the cover of Itsy Bitsy Teeny Weeny Yellow Polka Dot Bikini that I still recall as well, was Turtle Power by Partners in Kryme.

The movie poster made its way to my door that year. You can see what it looked like in the image that is alongside today's post.

I bought the movie on DVD a number of years ago when I was trying to get my eldest nephew interested in it. He liked this one, wasn't too keen on its sequel and we both disliked the third movie of the series.

Hmm... I think I might watch it tonight when I have some free time. For, you know, old time's sake.
Posted by David Taylor at 9:18 AM