Over the past week or so, I've found myself trying a couple of peculiar flavoured pizzas. One was okay, the other - not so much.

Both were from Asda. The first was a Mac 'N Cheese flavour. 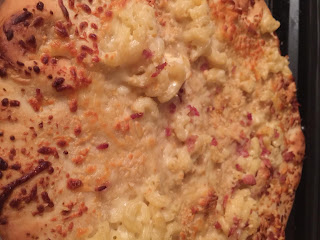 This was the one I found okay. It had macaroni on it.

The second pizza I had was a 'Cheesy Chips' flavour. Yes, it was a pizza with French fries on top of it.

It wasn't for me.

It was a cool Idea, I suppose. However, it didn't work.I ended up removing the chips (some managed to remain hidden!) after realising I was enjoying the sweet chill sauce on the base.

I'm sure there are others out there who would like it.
Posted by David Taylor at 1:20 PM