Back To The Future Day

It's Back to the Future Day today.

It was this day in the movie Back to the Future II that Doc Brown, Marty McFly and Marty's girlfriend - Jennifer - made their visit from 1985.

When I first watched the movie back in 1989, I was looking forward to the 'Year 2000' because I wanted to ride hoverboards and drive in flying cars.

Hoverboards and flying cars are still a long way off, I guess.

As a 1979 baby, a good portion of my childhood was obviously spent in the 1980s. You can't really tell the tale of my growing up back then without mentioning Back to the Future.

I was a hardcore fan of the films back then. I collected the Panini stickers of the film (didn't complete it!), I saved up packets of Smiths Crisps to send off for a board game the company was giving away (it was a laminated paper), going to see all three of the movies in the cinema.

While listing all the things about Back to the Future, another memory hit me. I was about to write 'recording Back to the Future on its TV premiere on Christmas Day 1988' and wanted to make sure my memory was indeed accurate.

To see if I was right, I headed over to the BBC Radio Times archive and did a search for the television listings for Christmas Day of '88. The result: 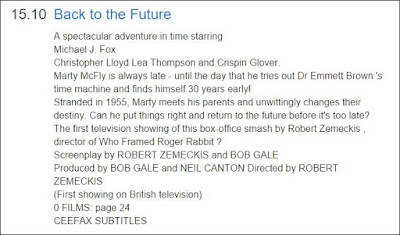 So, yeah, I guess Back to the Future really has been a small part of my life.

It wasn't just a part of my childhood that has been touched by the trilogy.

Even though I have all those memories - and more - of being a fan, the one I take the most pleasure in is I was able to introduce my eldest nephew to the films back when he was younger.

On one occasion, I took him into work and a colleague who works in film introduced himself. He asked my nephew 'What's your favourite movie?'

Without hesitation, the response was 'Back to the Future'.

My friend was impressed. And so was I.

There are other Back to the Future nephew memories, though.

There was one occasion when we were in the car and he started pointing out the window shouting 'Libyans!'

I followed his direction. In front of us was a Volkswagen Camper van driving on the opposite side of the road.

And there was also the time when we both got in trouble after he and Biff Tannen yelled 'Shiiiiiiit!' in unison as the bad guy crashed his car into the back of a manure wagon near the end of the second movie.

I forgot to mention that my sister was watching it with us that day. It was the first time I had heard him swear. I felt like I had corrupted the lad.

Maybe I should find myself a DeLorean, travel back to 2004 and stop that event from ever taking place.
Posted by David Taylor at 9:00 AM