On January 13th of last year, I wrote about buying what was then McDonald's latest creation - the McPlant.

I noted that I enjoyed the vegan burger and said I would try it again at a future time. Well, I stuck to my vow and did have a few more McPlants during 2022.

As for 2023? That's where things became even more interesting. That's because, as of today, the burger giant has introduced a new version of the McPlant. 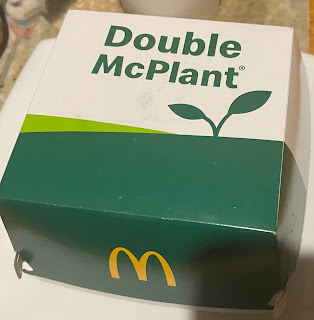 I bought one this evening for my dinner. 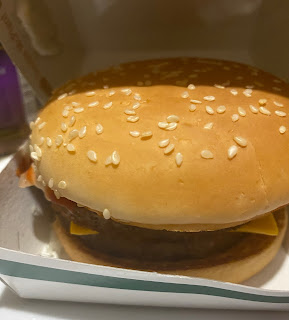 Just like with the original burger, it contains - as I quoted last month: 'vegan sandwich sauce along with ketchup, mustard, onion, pickles, lettuce, tomatoes and a vegan alternative to cheese'.
It obviously also comes with two plant-based patties that were co-developed alongside Beyond Meat.
I had no complaints last year. I had a minor irk with this one.
My burger fell apart as I was eating it. This caused my food to become a mess to deal with.
I strike that down to being too full.
Can't really complain about having a lot of filling, can I?
Time for the important question - will I buy another one? Just like last year, it's a YES. As long as I have some extra napkins with it.
Posted by David Taylor at 5:44 PM