The news broke a short time ago that Gianluca Vialli has passed away after a five-year battle with pancreatic cancer.

Whenever I've thought of Vialli over the years, I have always reminded myself of that time when he joined Chelsea after he won the Champions League with Juventus.

Nowadays, there are world class players everywhere you look in the Premier League. There were some back then. However, to me, it felt like the mid-1990s Premier League was all the more special when it attracted the likes of - to just through a few names that will now come to me - Jurgen Klinsmann, Ruud Gullit, Juninho, Fabrizio Ravanelli and, of course, Vialli.

One of my best friends at the time was a Chelsea supporter, so I always link Vialli with my friend's enthusiasm when the player joined the club.

Vialli ended up moving to be the Blues' player-manager - another thing that don't see anymore in the Premiership.

He was certainly a special player from a special time. 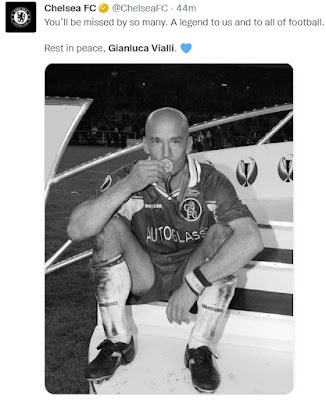