Betting On A Recent Trend

At the end of the 2018 World Cup, I made a note on my phone to remind me to bet on something when the 2022 tournament rolled around.

That reminder was alerted to me a few days ago.

And I have now placed the bet.

I have no confidence in it coming in this time, though.

You see, for the past few World Cups I have noticed a trend. I'm surely not the only person who has; I am confident that analysts and gamblers have also seen what I have observed.

In four, out of the last five World Cups, the previous tournament winners have failed to qualify from the groups stages.

The current trend started in 2002 when the 1998 winners - France - finished bottom of their group stages after a shambolic showing.

The only team to make any progress outside of the groups in the five years was Brazil in 2006. The country, which won the 2002 tournament, exited its following tourney with a loss to eventual finalists - France - in the quarter-finals.

For sure, this trend looks attractive when you see it there in front of you. What doesn't appeal is the fact that - in the 2022 tourney - France is in a group with Australia, Denmark and Tunisia. All winnable games.

I was able to get 8/1 odds. The trend was enough for me to consider it worth a gamble.

Here's something I threw together before publishing this post. It's a table showing how the previous World Cup winners have performed in the consecutive tournament. 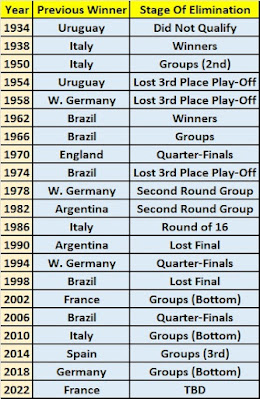