On Wednesday, I wrote a post after trying McDonald's new McCrispy Burger. I'm back with another McDonald's theme because - earlier today - I tried something that has recently been added to the breakfast menu. 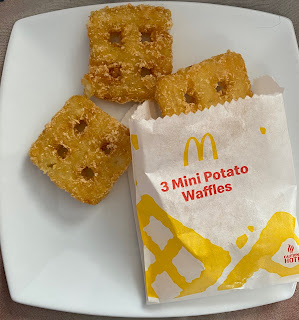 Going in, I thought that the new mini potato waffles would be quite dull.

I've eaten mini potato waffles in the past and just thought they would be like those. Well, the ones from McDonald's are more crispier than the regular potato waffles you'd find in the supermarkets.

I've never eaten potato waffles that have been fried. I've always cooked them in an oven. Therefore, I m possibly naïve to suggest the McDonald's offering is better than Birdseye. To me they are, though.

With that said, I should get myself a bag of Birdseye Mini Potato Waffles for £2.40 (their current price at Asda), fry them and see if they're close to McDonald's version.

One thing is for sure:  £2.40 for Birdseye's 456g bag is better value, waffle-to-waffle, contrasted to three you get with the fast food restaurant.