The fixture, which took place from Tottenham Hotspur Stadium, saw the New York Giants come back from behind to beat the Green Bay Packers 27-22.

As games go, I'd have to state that it was perfect for any first-time viewers that may have tuned in. 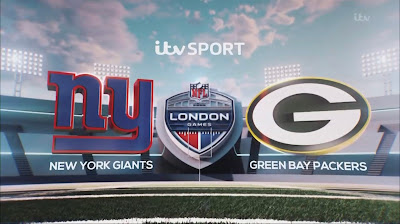 The presenters - Laura Woods, Jason Bell and Osi Umenyiora - are also perfect when they cover the sport.

The game broadcast was the feed from the NFL Network. However, the commentary was covered by ITV because it had Darren Fletcher and Jack Crawford on the mics as opposed to whoever the NFL Network had (I surmise it was Kevin Kugler and Mark Sanchez who both did last week's game from London for the Network).

I saw a fair bit of complaints about Fletcher and Crawford. For the latter, they felt he was too reserved and - toward Fletcher - the criticism was about why a football (soccer) commentator was doing American football.

The complaints about Fletcher were quite eye rolling considering he has commentated the sport on the radio, so he - to me - is a perfect play-by-play guy for ITV.

With that said, if ITV intends to have in-house commentators for the Super Bowl, I will undoubtedly choose to watch the game live on Sky Sports because I'd rather listen to the big one being called by the US broadcast teams.

I am already on record as saying I am not looking forward to the Super Bowl on ITV, after a commercial-free experience watching it on the BBC. ITV potentially having its own commentators for February 12th is a turnoff for me.

And that's coming from someone who thinks Darren Fletcher is perfect for ITV's coverage of the sport.

The next NFL game to appear on ITV will be the October 30th clash between the Denver Broncos and Jacksonville Jaguars.