Over the years, I've frequently written about horror movies in the October 31st post. I have two three films to cover today.

The three movies are call backs to previous posts I've written over the years.

On October 31st of 2009, the Halloween themed post saw me watch the Critters series from the 80s and 90s. I had seen the first two movies in the series many years before, but hadn't watched the other two films until preparing for the post in '09.

With the fourth movie having been released in 1992, I didn't expect another sequel to be made.

That was until I came across the following image while scrolling through Sky Cinema earlier this year. Critters Attack came out in 2019, but I had no idea of its existence until seeing it listed. I immediately had to watch it.
It's was what you would expect from a Critters movie, a bunch of 'crites' are in town terrorising the neighbourhood and it's up to children (and the bounty hunter - more on that later) to get rid of them.
There were a few slight nods to the original movies. The biggest of which was the aforementioned bounty hunter.
In the original movies, the bounty hunters would come to earth and morph into humans to blend in. Well, the bounty hunter in the Critters Attack is female and played by none other than Dee Wallace.
Yes, she is the actress who played the mother in ET, but - and more to the point of the Critters franchise - is also the mother in the original Critters movie!
It was fun to see Wallace once again in a Critters film and with a different role.
You can't take Critters films seriously. If you think you have to, I don't believe it'll be the movie for you.
The next couple of call backs are from a more recent Halloween post.
On October 31st 2019, I wrote about having watched, what was was then, the newest Halloween movie. It was a reboot sequel of John Carpenter's original Halloween film from 1978.
Its sequel - Halloween Kills - came out last year. I got to watch it on Sky Cinema when it premiered in May or June. 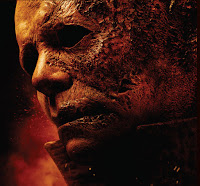 The movie follows on from the same Halloween night which took place in the previous movie. When we last left Michael Myers he was inside Laurie Strode's house which was burning down.
Laurie spends most of this movie inside a hospital while Myers continues his rampage.
Without giving away any spoilers, it ends with Michael Myers still alive.
There was a scene in it which had three dead bodies in a playground. Myers had placed masks on each victims' head. Each one representing the three different masks that were in the original Halloween III movie (which I love!).
As for entire film? Well - it's a Halloween film. I always find them enjoyable just as long as you suspend your disbelief and not take it seriously. Especially when the antagonist is shot or stabbed countless times and still comes back.
If all goes to plan, the Halloween 31st 2023 post will be about Halloween Ends, which is meant to bring closure to the series.
'Meant to bring closure' being the operative wording.
Film three is.. Halloween Ends.
Yes, I was able to catch the final instalment of the series.
I did not like it at all.
Michael Myers didn't play enough of a role in it. He had a surrogate who was kind of allured to the killer.
With that said, Myers does end up murdering, but it was in the latter part of the movie.
The story was quite crap. When the credits rolled, I felt like I had wasted almost two hours of my time.
They should have just ended the latest reboots after Halloween Kills because the third one felt like it existed just because.. well, just because they could make one.
Posted by David Taylor at 12:00 AM