When it comes to horror movies, I am  Freddy Krueger guy.

But that hasn't stopped me from checking out other slasher films over the years. 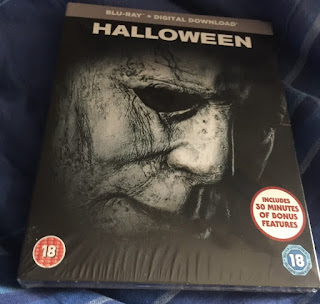 When I was in the midst of my horror movie fandom back in the 1980's, the next best horror villain - in my eyes - was Michael Myers.

Myers was the baddie from the Halloween movies. The thing is - even though I watched every single A Nightmare on Elm Street film, I know for sure I haven't seen every Halloween. All I know is I've seen all of them up to Halloween V, but anything else is 'maybe' or 'maybe not'.

I absolutely avoided the Rob Zombie versions of the movie that came out in the mid-to-late 2000's. My intrigue in the franchise perked back up last year when I heard that they had created a sequel to the original movie that ignored the existence of all of the other follow up films.

I bought the film on Blu-ray a few weeks ago with the intention of watching it today. WWE ruined this plan by announcing its Crown Jewel 2019 event from Saudi Arabia (with an early evening start), so I've had to watch it earlier than I wanted to.

As for the film - I thought it certainly was intriguing idea to forget everything that happened after 1978's film and then revisit things forty years later.

If it were to happen to the Nightmare movies, I wouldn't like it. Therefore, I would not be surprised if some Halloween fans were not as receptive to the idea of this movie. With that said I am sure most would have considered it cool to see Jamie Lee Curtis once again reprise her role as Laurie Strode even if we're meant to forget that she has been in other Halloween films after the original.

Another thing that made it feel like modern-day (which it was, but work with me on this!) is the movie began with two podcasters visiting Myers at the mental hospital in the hope of interviewing him.

The podcast thing was a a good element to the story because there are a lot of podcasts that cover murder cases and the like, so this was believable (if that makes sense).

I knew the podcasters weren't long for the world, though.

When they met Myers, one of them showed Myers the mask he had used in the 1978 murders. God knows how the podcaster managed to get that sort of evidence, but it was obviously going to end up back in the possession of its original bearer.