The following post was written yesterday afternoon with it scheduled to go live at 12am BST today
I've just finished watching the season finale of Obi-Wan Kenobi - Disney Plus' most recent Star Wars series - and I thought I'd share some closing thoughts after having watched each episode religiously over the past five weeks. 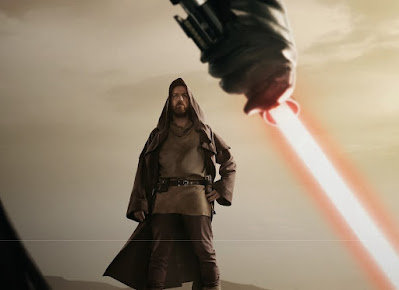 Before I even get into this series, I must first draw attention to what is a HUGE elephant in the room.
On December 18 2020, shortly after the series was announced by Disney, I shared my anguish that Disney was about to ruin something that had been a part of Star Wars canon since the first movie - Episode IV: A New Hope - because, in Obi-Wan's fight with Darth Vader, they referred to their previous duel as being the last time they met (this was when Obi-Wan and Anakin fought to what Obi-Wan thought was to the death and left an evil Anakin to burn on the fiery planet of Mustafar).
I still feel that they should not have changed that narrative. In this series, which is set ten years after Revenge of the Sith (when Anakin and Obi-Wan had the aforementioned duel), Kenobi finds out that Darth Vader is Anakin Skywalker and they do indeed meet again. This ultimately tarnishes the scene in A New Hope, which - as I pointed out almost two years ago - was what was supposed to have been their first meeting in as many years.
Obi-Wan Kenobi did indeed have the rematch, or rather: rematches, of the century. So, yeah, I was slightly disillusioned by that. However, other than that HUGE issue, I have to admit.. I enjoyed the six episodes.
It was wonderful to catch back up with Ob-Wan after the events of Revenge of the Sith and see how things were like leading up to his final adventure years later.
Back when the programme was in production, I read that Princess Leia and Luke Skywalker would not have major parts in the series. Well, that report was half-wrong.
Leia was a key part in this series because Obi-Wan has to rescue her. I have to give two giant thumbs up to the casting because the actress who played Leia was good. Plus, the wardrobe and stylists made her look like a mini Carrie Fisher.
As for Luke Skywalker? Well - he was in the series but played a small part in the story. However, we did get to see his first proper introduction to Obi-Wan at the conclusion of the final episode.
Darth Vader was more villainous in this series than he had been in any of the movies or other spin-offs I've seen, or read, him in.
I really hope there is a way to bring this series back for at least one more season.
Posted by David Taylor at 12:00 AM