The 4 Ps (Paramount Plus Product Placement)

There was an excellent job of product placement on today's episode of Neighbours.

Glen Donnelly was sitting at home, whilst trying to fight off his painkiller addiction, and decided to switch on the television.

When the TV came on, the character was greeted by the Paramount Plus screen. 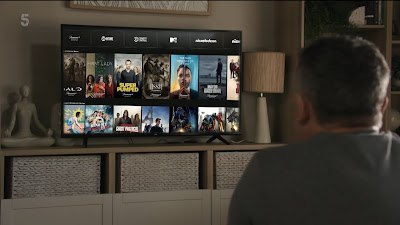 I thought it was clever placement considering that today - June 22nd 2022 -  is the day that Paramount Plus has launched over here in the UK and Ireland.

It was no coincidence that Paramount Plus was given the short screen time. Channel 5, which airs Neighbours in Great Britain, is owned by Paramount Networks.

Paramount is going all-in as it pertains promoting the launch.

As well as today's brief scene in Neighbours, I saw that Sylvester Stallone was in London yesterday plugging his Paramount+ series - Tulsa Kings (coming later this year), Kevin Costner appeared live in Lorraine Kelly's studio this morning to talk about his programme Yellowstone and Halo - one of the programmes exclusive to the streaming service - will air its premiere episode on Channel 5 this evening.