This past weekend was one of the most memorable I've experienced in my entire life.

It was technically a four-day weekend if you consider that Thursday and Friday were Bank Holidays in Great Britain due to it being the Queen's Platinum Jubilee.

The Jubilee was eventful.

The highlight of the entire weekend was Wales' 1-0 win over Ukraine in the World Cup qualifier. I am still, almost forty-eight hours removed from the final whistle, asking myself if it has really happened.

Below is yesterday's issue of the South Wales Echo. It's something I'll treasure and - for the next few days - refer to in order to answer my 'Did it really happen?' thoughts. 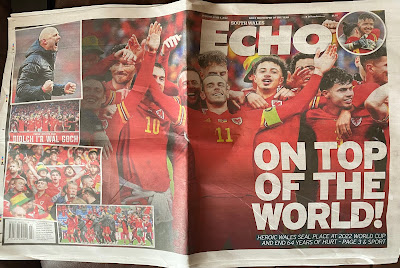 The end of the weekend was WWE Hell in a Cell. I was so exhausted from the four days that I ended up falling asleep right before the main event was about to start.

And what a main event it was (I caught it when I woke up a couple of hours later). Cody Rhodes, torn pec and all, won against Seth Rollins.