Later on this summer, WWE will release the thirtieth anniversary of SummerSlam 1992 on Blu-ray and DVD.

I've already preordered my copy because it is an event that means a lot to me because it was the first major PPV to take place here in Great Britain.

I already own it on VHS (both when I taped it on Sky Sports and the copy which was released months later in the shops) and even transferred the tape to backup. However, I want this special edition because there are 'bonus extras from the time' advertised.

That's all it states. I hope it includes a lot of unseen footage. For example, there was an interlude of sorts during the taping which involved wrestling legends being introduced to the audience. I read about that segment at the time, and was told about it by a classmate who was lucky enough to go to see the show live, but I have never seen it on film. 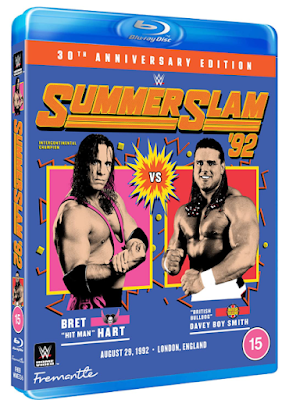 The release date is August 29th, which will be thirty years to the day since the event was filmed at Wembley Stadium. However, the show aired for the first time on PPV/TV a couple of nights later.