The American football season is just around the corner.

The first sign landed on my doormat yesterday morning when Lindy's Pro Football 2022 Season Preview came in the post. 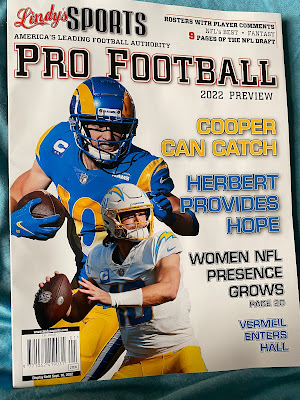 I received the Los Angeles cover. I suppose the newsagents here in the UK will all have this edition because the Rams are the current Super Bowl Champions.

Each time I buy Lindy's, I think back to the very first time I bought one.

I was in a newsagent in the middle of nowhere, west Wales during the summer of 1995. I looked for something to read on the coach back home and Lindy's stood out.

There was a many-year gap between my first and next purchase. However, I have tried to buy it each season for at least the last fifteen years or so.

I guess I am loyal to the title simply because it was the first publication I ever bought. They're certainly one of my favourite aids to building up anticipation for upcoming seasons.

As of the time of this post, there are eighty-one days 'til kick off. It's coming.