Whenever I've written about the deaths of Tupac Shakur and Christopher Wallace (The Notorious B.I.G.), I've always pointed out that I first learned about their respective deaths on the days afterwards.

I remember the exact time - or close enough to it - because I was rushing into the sixth form college I attended for registration. As soon as I entered the building, I was stopped by a friend of mine who asked me 'Have you heard about Biggie?'

I hadn't. He told me that the rapper had died after a shooting in California the night before.

So, yes, today - March 9th - is the twenty-fifth anniversary of the Notorious B.I.G's death. Tomorrow will obviously be the anniversary of when the news first reached me.

There isn't really much I can say about Biggie Smalls that I haven't written before.

I first came across him in the autumn of 1994 when I would watch Yo MTV Raps on Saturday nights. The video which introduced me to him was Juicy.

From there, I followed his career finding myself torn between him and 2Pac as their feud played out on video, vinyl and the press.

I have such great memories from that time. From both rappers.

On September 13th last year, I wrote about 2Pac on what was the start of the twenty-fifth year since 2Pac left us and briefly mentioned how I was not keen on a lot of the posthumous albums that have been released under 2Pac's name. I especially dislike the content which has other rappers singing duets with Pac.

Well, I have the same dislike for some of the records that have been released with Biggie on them. However, just the other day, I was listening to random songs on Apple Music and one came up which sounded good.

I had a look at the title and noticed it came from a Biggie album I have actively avoided since it was released in 2005.

The resistance ended. I bought the album later that day. 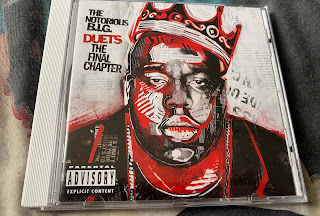 I've still yet to listen to it. I plan to do that today. However, I'll make sure I also listen to my favourites from Ready To Die and Life After Death.