I've written about old editions of Lynx deodorant a few times in the past and thought I would publish a post to show what I bought over Christmas.

Whilst doing shopping, I came across a 'retro limited edition' gift set with an old school Lynx scent.

As you'll see below, the box was kind of shaped like one end of a Christmas cracker. Inside was a can of Lynx Java and a pair of Lynx Java socks.

I bought myself a box and also bought one for my friend I knew would have gotten a kick out of seeing the old school Lynx.

Unfortunately, as we both agreed, Lynx Java - even though it is one of the scents which brings us back to our school days - was never the best Lynx. 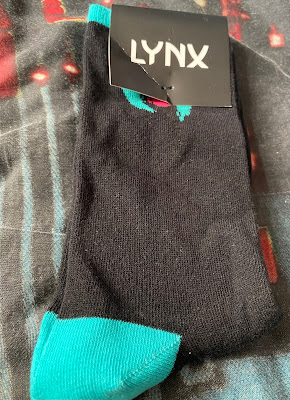 Lynx Tempest is still the one we'd like to see again. I also wouldn't mind having Lynx Nevada again. Oriental, as a brand name, might not be politically correct anymore. However, that's another one I'd rank above Java if I were looking for an iconic scent from the Lynx brand.

As for this limited edition return of Java - it didn't smell like I remembered. It could be because I rarely wore it, though. I would have a better gauge on the scent if Tempest or Nevada were afforded similar returns.