I was planning to do a follow up to last year's Halloween blog post by watching all seven of the original movies in the Child's Play series.

This idea didn't pan out the way I had wanted.

In my quest to obtain all seven DVDs, I scoured some websites with second-hand moves. I was able to find the first, sixth and seventh films on DVD. This coming after I purchased a box set of the second-to-fifth films in the series in a collection titled 'Chucky: The Killer DVD Collection'. 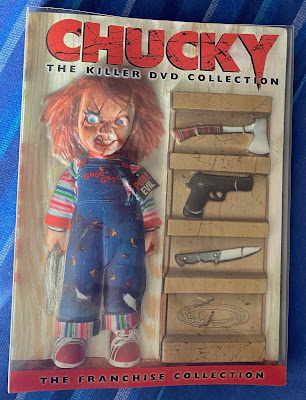 The case looks amazing, doesn't it?

Unfortunately, the discs aren't. They're from a different region to my player, so I am unable to watch them.

Yes - I could find hacks to make my Blu-ray Player multi-region. However, I am reluctant to do so in case it cause problems down the road.

I've had to send this box set back. It's a shame really, because it does look cool.

I don't know what the plan will be for the Halloween post of 2021. What I do know is it'll likely go live at late on the 30th rather than on the 31st due to Halloween falling on a Sunday. The fantasy NFL posts take priority on Sundays during the autumn.