Disney announced most of the cast of the Obi-Wan Kenobi mini series that has gone in production.

I already knew that Ewan McGregor and Hayden Christensen would be reprising their roles as Obi-Wan and Anakin Skywalker (AKA Darth Vader) respectively, but other names have been added now. You can see the image that Disney sent out yesterday below. 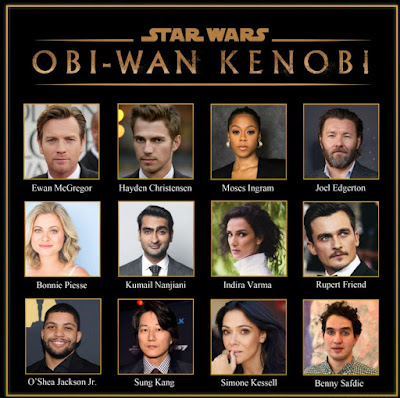 Two of the new faces added to the list stood out to me - the first is Indira Varma, who has been in a few programmes I've watched over the years (Game of Thrones, Paranoid) and the other name is O'Shea Jackson Jr. - the son of one of my favourite rappers - Ice Cube.

Filming begins next month for the series which will be set ten years after Revenge of the Sith.