I came across some tweets on Twitter this morning which noted that today is the eighteenth anniversary of Curt Hennig's death.
I remember that week well.
In what is quite a coincidence, a little over a week ago, I was trying to find something on YouTube to have as background noise while I fell asleep. One of the videos that came up was from November of 1992 that involved Hennig, or rather - Mr Perfect.
Back then, Hennig had taken time away from competing after losing the Intercontinental Championship to Bret Hart at SummerSlam 1991. He then went on to be Ric Flair's 'Executive Consultant' after the Nature Boy made his debut in the World Wrestling Federation.
As well as working alongside Flair during matches and promos, Perfect also spent time on commentary. One of the shows he appeared on was Prime Time Wrestling - a programme hosted by Vince McMahon with people like 'Hacksaw' Jim Duggan, Hillbilly Jim, Bobby Heenan and Perfect in which they discussed the latest happening within the WWF. 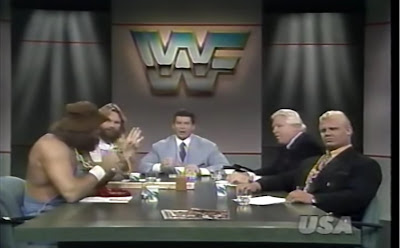 The episode in particular aired shortly after it was revealed that a scheduled match for the WWF Survivor Series of 1992 was not going to happen.
Originally, 'Macho Man' Randy Savage was meant to team with his Ultimate Maniacs tag team partner - The Ultimate Warrior - to take on Razor Ramon and Ric Flair. However, in real-life, McMahon had fired Warrior for - I believe - purchasing human growth hormones at a time when McMahon's company was being investigated for steroid distribution.
It left Savage looking for a partner. And he found that man during the episode of Prime Time.
The episode kicked off with McMahon introducing Savage, who was apparently in a studio somewhere else. They alluded to the fact that Warrior would not be at the Survivor Series and began the ball rolling on a show-long angle which started with Savage saying he wanted Mr Perfect as his partner for the match.
Elsewhere, in another studio, Razor Ramon and Perfect's associate - Ric Flair - did their best to try and talk Hennig away from considering Savage's proposition. 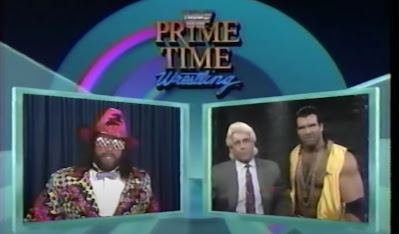 The episode concluded with Perfect accepting the offer. He even poured a jug of water over his former partner in crime, Bobby Heenan, to confirm his babyface turn.
It was such a great angle. And to have Hennig slowly turn babyface throughout the show was great for its time. I remember sitting at home on the evening that it aired on TV here in the UK and was not sure whether Perfect would stick with the bad guys or become a goodie (it would be a couple of years later when I learned about the heel/babyface terminology).
Memories of that night flooded back as I watched the YouTube video. It was such simple storytelling to set up a match that had obviously no build up before that night.
You could call it a Perfect angle.
Posted by David Taylor at 11:08 AM