It has almost reached midday as I begin to type today's post. I realised that I haven't written anything, so took a look on Twitter to gain some inspiration.
Usually, I would look at what's trending. Didn't need to do that today because the first tweet I came across was scary enough to inspire me. 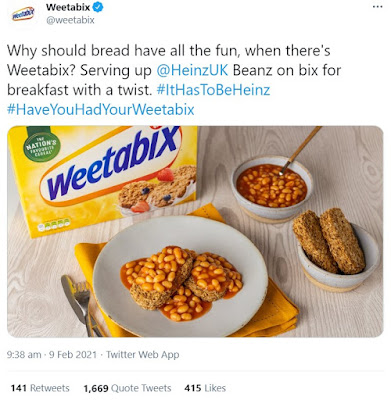 The Weetabix Twitter account has a suggestion for its followers. It is more or less asking people to consider trying a breakfast with a twist by having beans on top of a Weetabix.
How about.. NO!?
I remember back in the 80's there used to be a commercial for Bluebird Toys' A La Carte Kitchen and the young girl in the advert came into her parents' bedroom to make them breakfast in bed. The girl poured beans on a mini Swiss roll and served it up.
Seeing beans on a Swiss roll has evidently left a scar in my memory bank because it has been well over thirty-five years since I first viewed that advert. I'll tell you what, though - I'd take the beans and swiss roll before I'd even consider Weetabix and beans.
And that's saying something.
Posted by David Taylor at 12:09 PM