A Spur Of The Moment 'Both Teams, Both Halves' Gamble

For a bit of fun, I've placed a 'Both Teams, Both Halves' goal scoring bet for this weekend.

I've selected one game from five different leagues starting with a game from Japan that starts at 9AM BST today.

It was a spur of the moment idea that came to me, so there's zero method to it. The games were picked by a friend.

I asked her to give me a number for each league and I chose which game to bet on that way.

Like I said - there's not much method to this madness. 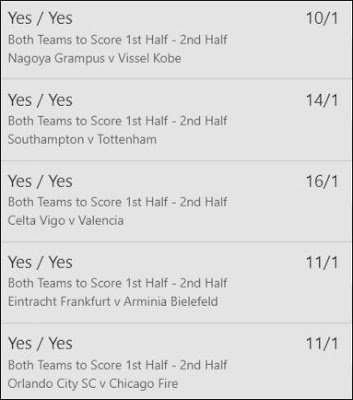