Another 'Exact Finishing Order' Bet For The 2020 NFL Season

It was an extension of a plan I wrote about last Wednesday. In those bets, I placed three Super Heinz bets using the predicted finishes that three annual publications came up with for the 2020 season.

I once again used the finishes projected by the yearbooks. However, I made some changes.

- This time, I did a Lucky 31 and bet on the five divisions in which the three magazines were not in agreement

The spinner was also used to work out the order I picked each league. 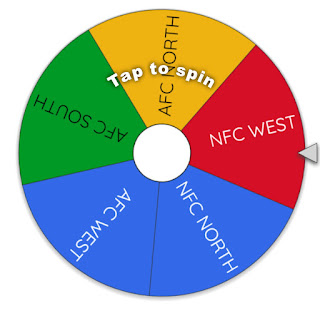 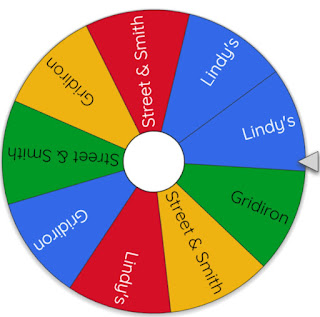 Here are the results. I have added the odds beside each order.
AFC West
Gridiron's yearbook was the winner in the battle to have the selection for the AFC West.
KANSAS CITY, LAS VEGAS, DENVER, LA CHARGER 9/2
NFC North
Lindy's prediction for the NFC North was what was selected in the second spin.
MINNESOTA, CHICAGO, GREEN BAY, DETROIT 17/2
AFC South
The circle stopped once again stopped on Gridiron in the third spin. This time, it was selecting for the AFC South pick.
TENNESSEE, INDIANAPOLIS, HOUSTON, JACKSONVILLE 7/2
NFC West
The Street and Smith yearbook is what the spinner stopped at for the NFC West selection.
SAN FRANCISCO, SEATTLE, LA RAMS, ARIZONA 7/2
AFC North
Street and Smith was the magazine that the circle selected for the AFC North.
BALTIMORE, PITTSBURGH, CLEVELAND, CINCINNATI  8/5
My Bet
As mentioned above, the five selections were to be placed in a Lucky 31. I chose to go with 50p a line, so the total spend came to £15.50.
If I am fortunate to get everything right, not only would I be very surprised, I would also have a return of £3,715.71. 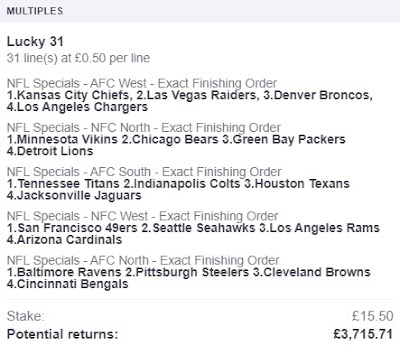