I haven't watched Coronation Street in quite a few years. However - I managed to catch part of Monday's episode and found myself thinking 'not the mother-in-law again!' when a familiar face was on the screen.

According to the current storyline, an ex-wife of a violent man has made her way to the cobbles to assist another lady who has been imprisoned for attacking the man.

The ex-wife is played by an actress named Paula Wilcox. She has popped up on programmes I've watched numerous times over the years and always seems to play a mother/mother-in-law in thos series'. 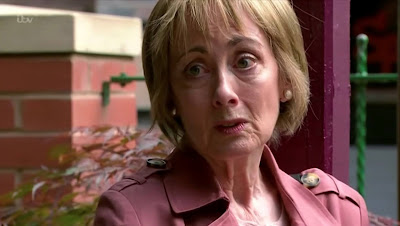 I first came across her when I watched Emmerdale many years ago. She showed up as Laurel Thomas' mother - Hilary Potts. The character was a regular, but didn't stay very long.

I would then see her show up on other programmes in bit parts. For example, I remember seeing her on Still Open All Hours.

The next comedy I caught her in was on Sky One's Living The Dream.

It's the series I loved because former pro wrestler - Kevin Nash -  was in it and he was brilliant. It's about a British family that moves to Florida to run a trailer park.

From memory, I believe Paula Wilcox had a minor role in season one, but she was a regular for the second season.

She played the part of the mother/mother-in-law of the main family in it.

Next up is the most recent season of Grantchester. This time she played the mother/mother-in-law of Robson Greene's family in the series.

And now, she was revealed to be Tim Metcalfe's mother in Coronation Street. This means she's Sally's mother-in-law.

I'm not hating, though. She evidently is good enough to get the roles she is given and portrays them well.

Her on-screen families are made up of good actors and actresses. She wouldn't be given those roles if the producers didn't think she was capable.

As an aside, I decided to write about Wilcox as soon as I saw her on Monday night. I took a screenshot of her on Tuesday morning to prepare for this post and then - moments later - I walked downstairs and she was on the TV yet again.

This time, the actress was being interviewed on breakfast television about her new role. As soon as I saw her, I chuckled to myself and thought to myself something I seem to be repeating every time I see her.

Not the mother-in-law again. 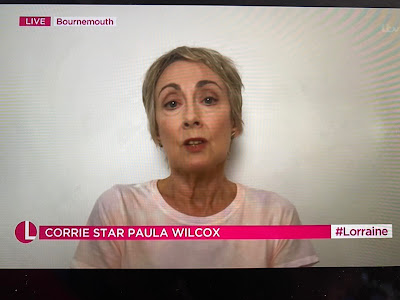