I've Been Playing Animal Crossing On The Switch

I've been playing Animal Crossing on the Nintendo Switch for most of the day.

The best way I can describe the game is it's a 'social simulation' in which you live on a desert island and interact with its inhabitants on a daily basis by doing tasks to earn the island's currency. 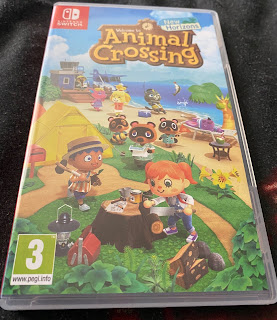 What ever I write about the game would never do it justice, however. There's far more to it than even I can write or even know at this stage.

I was going to buy the Nintendo Wii version years ago, but decided not to in the end. I made the decision to buy the Switch edition because I won a few bets over the weekend and thought I'd get something to show for those victories.

I'm going into this not really knowing anything about the game other than the little things I've read over the years.

There was no other thing I wanted to name it after other than Lian Yu, which is the island Oliver Queen found himself on in Arrow. However, my idea was to name it 'Lian Yu Too' for a laugh. I stumbled upon a problem, though. There was no room for the final O in 'too', so I opted for the less funnier, 'Lian Yu II'.

And I am sure I'm not the only person to name their island that name.

By the way - Lian Yu means 'purgatory' in Mandarin. My island is going to be far from that.

Expect frequent updates about my thoughts on the game. Especially during this lockdown where a little escape to another island seems like a remedy from this purgatory we find ourselves in!
Posted by David Taylor at 2:11 PM