Something I've Learned In 2018

It's the last proper post of 2018 today. I'll be doing the annual Year in Review post tomorrow where I take a look over all of the predictions I made on January 1st to see how I did - or rather didn't (spoiler alert) - do.

What I want to write today is about something I've learned in 2018.

Back in the latter part of 2017, my sister's family dog passed away. I wrote about it extensively back when he was unwell and then when the decision was made to put him out of his misery. It was not a nice thing to see my nephews totally devastated by the loss of their pet.

In the months that followed, they decided to look to adopt a new pet rather than raise one up from a puppy. I had no say in the matter, but I was against the idea. I thought it would be best to go with a puppy like they had with Paddy.

Even though I didn't share my feelings on the matter, I am glad they went with their decision.

In the spring of 2018, Spiky was brought in to their family. He was a two-year old who had to be taken care of after his original owner had to move to a home.

He came along needing a lot of TLC. He was very nervous and upset after making the move. However, he has now settled in nicely and is truly part of their family.

He's definitely a part of mine as well. Due to having been used to having company throughout his early life, Spiky doesn't like being left alone, so - when my sister and her partner are at work - he ends up staying here with us as there's always somebody here.

I've never had a dog as a pet, but he feels like one when he's around.

So - the point I am trying to make is that, in 2018, I learned that I was wrong about adopting a pet. I believe it is a good thing. It brings just as much joy to people's lives as it would having a pet from birth and raising it up.

Spiky made a believer out of me. 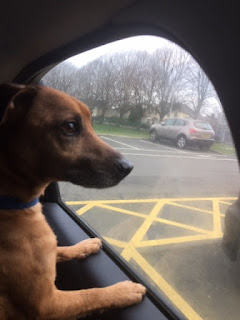