A Year Too Late

If you read this blog around this time last year, you may have seen a post where I wrote about having a bet on the Chicago Cubs winning the World Series of Baseball.(Edit: I can't find it as of the time of writing, but I am 100% sure I covered this last year).

I don't have a clue about baseball. The reason behind my wager was because, in Back to the Future II which had part of the story set in 2015, there was a scene where a Cubs fan was celebrating his team winning baseball's grandest prize. 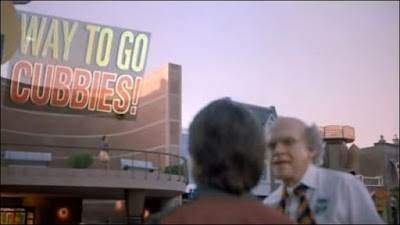 To put it in context, the chance of the Cubs winning was gigantic. It had been well over 100 years since they claimed the prize. At the time I placed my bet, their price was 66/1. The £2 stake was more for a laugh than anything else.

I didn't think it would win, so imagine my surprise when I found out that the team had made it to the final four.

And then while you're at it, you may as well imagine my disappointment that they lost in the semi-finals (or what ever they call it in baseball).

I could live with the £2 loss. The thing I wanted more was for the Cubs to win the World Series in 2015 just so it could become one of those legendary stories about the movie writers predicting something twenty-six years earlier. It would have been an incredible news story to coincide with the thirtieth anniversary of the original movie's release.

The reason why I'm back on the Chicago Cubs topic today is because the team has once again made it to the play-offs. They've gone one further this time - they've made it to the finals.

They're heavy favourites to win the series as well. I'm not as invested in them winning this year, but - seeing as I don't follow baseball - I may as well jump on the bandwagon and hope the Cubs are victorious this time.