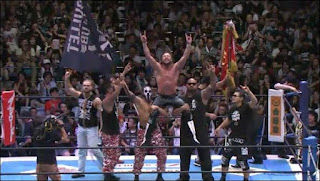 The match was very good. In fact - the last three nights of the tournament had some amazing matches.

Omega is the first foreigner to win the tourney in its twenty-six year history. That's pretty great.

This now means that, barring any bumps in the road, the Canadian will wrestle for the IWGP Heavyweight Championship in the main event of WrestleKingdom 11 on January 4th 2017.

And that's all for the G1 for this year. I have to admit, I liked last year's tournament better than the 2016 edition. However, that shouldn't take away anything from it. As noted, there were some brilliant bouts during the three weeks but the final few days had incredible match-ups.
Posted by David Taylor at 12:00 AM